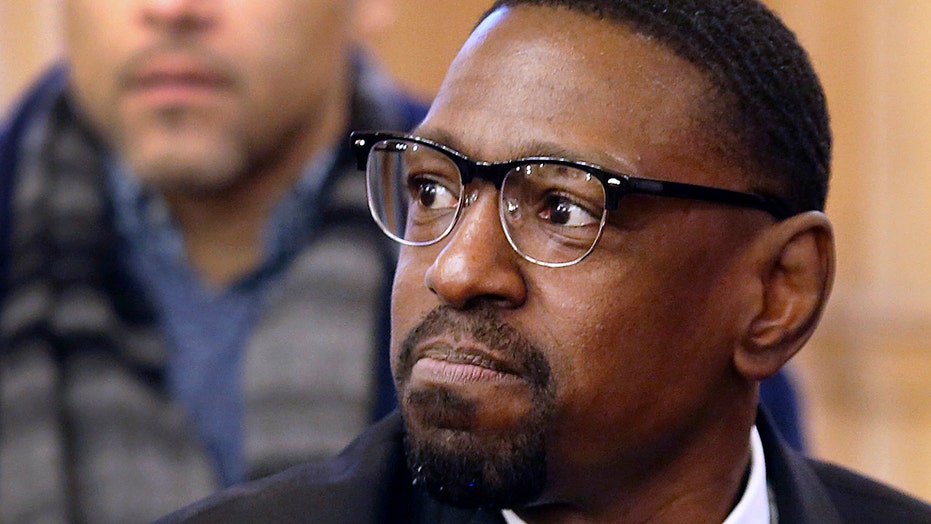 A Kansas man who spent 23 years behind bars for a double murder he did not commit was awarded $1.5 million on Monday, after winning his wrongful conviction lawsuit against the state. He also had his record expunged.

Lamote McIntyre, who is in his 40s today, was sentenced to serve two consecutive life terms in prison. He was freed in 2017 after a local prosecutor asked the court to vacate his convictions and to drop all charges, calling his case an example of "manifest injustice."

He was 17 years old when he was arrested on April 15, 1994, just hours after two men were fatally shot while sitting in a parked car in their Kansas City, Kansas, neighborhood. Doniel Quinn, 21, was pronounced dead at the scene. Donald Ewing, 34, was rushed to the hospital where he later died.

No physical evidence tied McIntyre to the crime but two eyewitnesses identified him as the shooter.

“Today, Lamonte McIntyre has been declared, finally and conclusively, a completely innocent man,” his attorney, Cheryl Pilate said in an emailed statement, according to The Associated Press. “That long-overdue recognition, along with the statutory payment and other benefits, will help lighten a bit the heavy load he has carried. Lamonte is grateful for the benefits of the compensation statute, but he knows his fight for justice is far from over.”

In this Wednesday, Feb. 14, 2018, file photo, Lamonte McIntyre, convicted of a 1994 double homicide in Kansas City, Kan., sits before the Senate Judiciary Committee where he urged them to approve a bill creating a compensation system in Kansas for people wrongfully convicted of crimes. (Thad Allton/The Topeka Capital-Journal via AP, File)

His family is pursuing a separate federal lawsuit against the Unified Government of Wyandotte County and Kansas City, Kansas, and the individual officers who they contend are responsible for the lost 23 years.

“I’m all right. I’m happy, you know,” McIntyre told reporters after his 2017 release, according to the Kansas City Star. “I’m here thanking God. I’m thanking everybody who supported me and been here for me. It feels good. I feel good. I’m happy.”

“This is what I’m waiting on right here,” he said, hugging his mother, Rosie. “I’m glad that everyone showed up out here to experience it with me. I appreciate it a great deal.”

Documents made public during an eight-year effort to exonerate McIntyre allege the homicide detective on the case used his power to prey for decades on African-American women, including McIntyre's mother. They also accuse the prosecutor, Terra Morehead, of intimidating witnesses who had said that McIntyre was not the killer. And they say the presiding judge had a romantic relationship with Morehead before the trial that neither disclosed at the time.

Ejected gunshot shells were recovered from the scene of the crime in 1994 but were never examined for fingerprints. Although McIntyre was arrested within hours of the shooting, police never sought to examine his clothing, despite witness statements that the gunman was standing right next to the car when the shots were fired and likely would have been hit by exploding glass and possibly blood, The National Registry of Exonerations wrote about his case.

His case, along with several others, prompted a new Kansas law, enacted in 2018, requiring the state to compensate victims of wrongful convictions. Kansas Attorney General Derek Schmidt, a Republican, had received bipartisan criticism for resisting McIntyre's compensation claim while agreeing to two others.

“We are committed to faithfully administering the state's mistaken-conviction law as the legislature wrote it,” Kansas Attorney General Derek Schmidt said Monday in a news release. “In this case, our office worked diligently to obtain and review all available evidence, including evidence identified but not provided in the earlier judicial proceedings.”

Under the statute, McIntyre will receive $65,000 for each of the 23 years he wrongly spent in prison, among other benefits. The court also ordered that records of his conviction and DNA profile be expunged. If McIntyre prevails in his separate civil lawsuit against the Unified Government and the others involved in his unjust prosecution, he would have to repay Kansas for the money he was awarded under the wrongful compensation statute, his attorney noted.

This is the third case in Kansas in which compensation has been granted since the 2018 wrongful-conviction law was enacted.

Kansas agreed to pay $1.1 million to Richard Jones, of Kansas City, Kansas, who spent 17 years in prison after being wrongfully convicted of a 2000 robbery that he says was committed by someone who looks just like him. The state agreed to pay $1.03 million to Floyd Bledsoe, who spent nearly 16 years behind bars for the rape and murder of a 14-year-old girl northeast of Topeka, a crime that his brother confessed to in a suicide note.