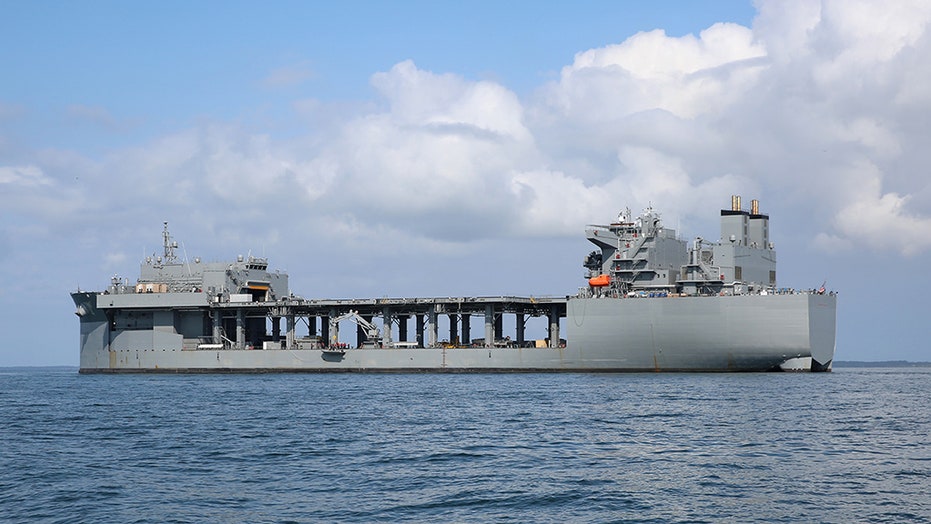 The 96-year-old World War II hero Hershel "Woody" Williams braved the Virginia cold for the commissioning of a Navy ship that has been named for him.

The Navy commissioned the Expeditionary Sea Base USS Hershel “Woody” Williams in Norfolk on Saturday. Williams is the last surviving Medal of Honor recipient from the Battle of Iwo Jima

“The commissioning of this ship is one of the realities I am extremely humble about,” Williams told the gathering.

“The commissioning of this ship is one of the realities I am extremely humble about,” Hershel “Woody” Williams said. (U.S. Navy)

VIRGINIA POLICE OFFICER GOES VIRAL FOR INSPIRING GOSPEL PERFORMANCE: 'I SING IN OR OUT OF UNIFORM'

“May all those who serve aboard this ship that bears my name be safe and proud," he said during his remarks. "May she have God's blessings for a long life of service to America, the greatest country on Earth."

The commissioning changes the designation of the ship built in 2017 from a support ship to a warship.

Its command has been transferred from the Military Sealift Command to Naval Surface Force Atlantic.

"This ship, by design, is intended to go over the horizon and into harm's way and I am confident they will do so, combat-ready and battle-minded," said Rear Adm. Roy Kitchener, commander of Naval Surface Force Atlantic.

Hershel "Woody" Williams at Saturday's commissioning of a Navy ship in his name. (U.S. Navy)

Williams received his Medal of Honor for actions as a demolition sergeant with the 3rd Marine Division in February 1945. As U.S. tanks tried to open a lane for infantry amid pillboxes and buried mines, he went forward alone seeking to reduce enemy machine gunfire.

Covered by only four riflemen, Williams fought for hours, returning repeatedly to his own lines to prepare demolition charges and obtain flamethrowers to wipe out enemy positions. On one occasion, he mounted a pillbox to insert the nozzle of his flamethrower through the air vent, killing the occupants and silencing the gun.

U.S. Sen. Joe Manchin delivered the principal address at Saturday's ceremony, praising his fellow West Virginian as "West Virginia strong through and through."

"I have never had a more prestigious honor to be able to be here with a person who is truly an American hero," Manchin said.