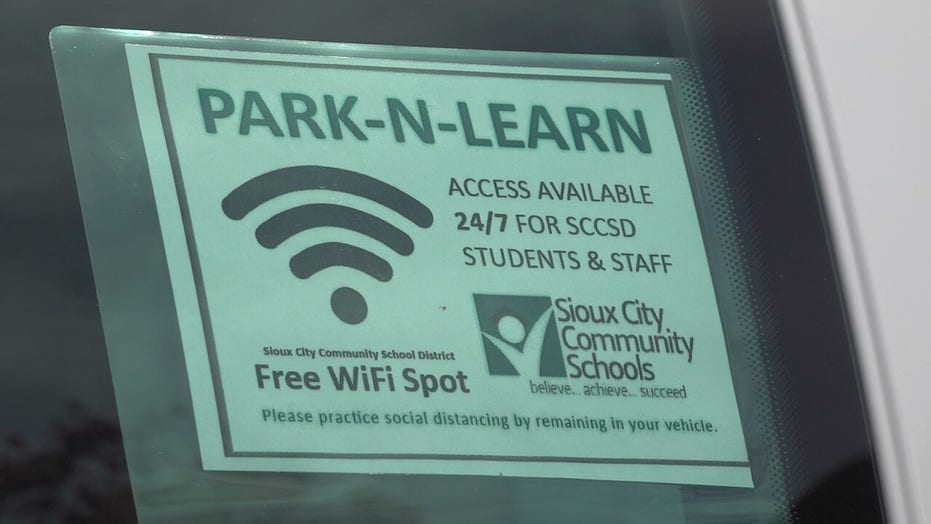 Sioux City Community Schools have sent vans equipped with WI-FI that serve as a hotspot connection in the city's most vulnerable communities.

Iowa’s pro-Trump governor is in a heated battle with education districts and teachers over the push to reopen schools.

In this May 6, 2020 file photo, President Donald Trump speaks during a meeting with Gov. Kim Reynolds, R-Iowa, in the Oval Office of the White House in Washington.  (AP)

"The Iowa State Education Association and the Iowa City Community School District are filing a lawsuit to confirm the authority of local school districts and their boards of directors in making decisions in the best interest of health and safety regarding school closures, virtual learning and other important measures," the ISEA said in a news release Wednesday.

The state said its next steps for the children is beyond science and politics — and economic concerns and health fears.

“Education is fundamental to the well-being of our children, and our teachers are essential to ensuring that our schoolkids return to learn rather than mark time and lose ground,” Reynolds said. “We can do this safely.”

The governor said educators could face discipline against their licenses if they disobey her rules.

Schools that do move to 100 percent virtual instruction will not be allowed to offer extracurriculars, which could drive classrooms to remain open even when outbreaks occur.

In July, Reynolds, who has refused to order the wearing of masks statewide, issued a mandate demanding schools offer at least 50 percent classroom instruction.

The governor said schools, where 15 percent or more of coronavirus tests were positive over the prior 14 days, can get permission to move schooling online for two weeks at a time.

Experts claim her number is arbitrary and three times higher than what the Centers for Disease Control and Prevention suggests is safe.

Thomas Tsai, a health policy researcher at Harvard, said it’s unwise to reopen schools as the virus, which devastated the U.S. economy and killed over 170,000 Americans, rages through Iowa.

“You are seeing both extremes,” he said.

July 30, 2020: Iowa Gov. Kim Reynolds listens to a question during a news conference on the state's guidance for returning to school in response to the coronavirus outbreak in Des Moines, Iowa.  (AP)

The state’s per capita cases are the highest in the Midwest. The number of hospitalized patients has increased to nearly 300, deaths surpassed 1,000 Wednesday, and dozens of nursing homes are suffering outbreaks.

“We’re about to see a tragedy occur in the state. And there’s not a lot we can do about it. That’s frightening,” said Sara Anne Willette of Ames, a parent and former math tutor who runs a website tracking state infection data.