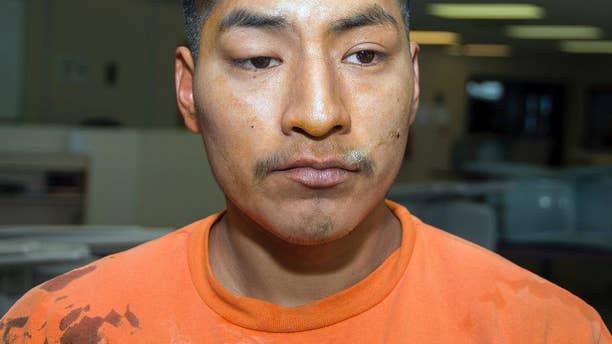 FILE - This Jan. 30, 2014 photo provided by the Arizona Department of Corrections shows inmate Jacob Harvey, accused of attacking a state prison teacher in Florence, Ariz. Harvey, who pleaded guilty to raping a prison teacher at the Eyman state prison, is set for sentencing Monday, Sept. 14, 2015. (Arizona Department of Corrections via AP, File) (The Associated Press)

An Arizona inmate who pleaded guilty to raping a prison teacher is set for a sentencing hearing where he could receive a life term.

Jacob Harvey is due in Pinal County Superior Court on Monday afternoon. The 21-year-old pleaded guilty to rape, assault and kidnapping charges last month for attacking the teacher in a classroom at the Eyman state prison in Florence in January 2014.

The woman is suing the state over an attack she says left her traumatized.

Harvey was in the first year of a 30-year sentence for raping a suburban Phoenix woman when he assaulted the teacher.