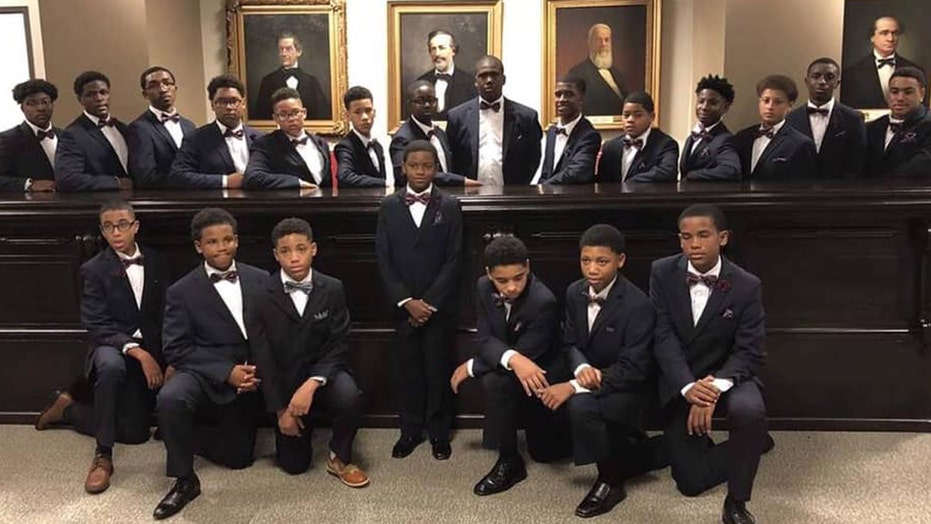 They dress for success -- full suit and bow tie -- and not only look the part, but also live it.

A group of African-Americans young men, grades six to nine, have been chosen as leaders in the Impact Agency to help break the cycle of incarceration so prevalent in their community in Lake Charles, La. Through the now 3-year-old agency, they receive mentorship, tutoring and networking opportunities.

PHILADELPHIA WOMAN ADOPTS 4 KIDS FROM SAME FAMILY: 'I KEPT THEM ALL TOGETHER'

"In order to address that increasing problem, we coordinated with the Lake Charles Police Department, sheriff's department, City of Lake Charles, parish office and Calcasieu Parish School Board and determined the necessity in starting a positive-change impact program," DeRosier added.

Impact Agency Program Director Braylon Harris, who is also a pastor, said they are "creating a continuous pipeline of inspired, intelligent and innovative young leaders."

Ronald Blanchard, 65, who had been retired after 40 years of teaching, returned to join the initiative as curriculum coordinator. He said the name is based on baseball legend Jackie Robinson's quote: "A life is not important except in the impact it has on other lives."

School principals and counselors recommend student leaders who lead either positively or negatively -- the idea is to pick those who are the most impactful -- and the program brings them together to build them up as life-changers.

"We actually created change agents through the youth of this area," said Blanchard, who is in the National Teacher Hall of Fame. "I've always believed in our children. If you invest in them, you're going to get a great return."

The young men recently hosted a symposium for 25 schools in the area with 1,300 students attending. They discussed issues like bullying, reaching academic achievements and respecting authority, and encouraged their peers to be more active in volunteering.

"I've never seen, in 40 years of education, anything like this. How do we impact change and the kids in the classroom were like, 'Why don't you ask us?'" Blanchard noted. "The answer was always sitting there, waiting for us to ask."

Students Tyler Mouton and Ian Richards shared how the mentoring program has changed their lives.

Mouton said it's helped him develop a voice: "I will use that voice to speak for my community and help others to have a better voice."

The program "taught me that I matter and now I am in a better place to take a stand for African Americans to ensure they have equal opportunity and equal rights," Richards said.

The kids have traveled to the state penitentiary, where many of them have family, and they've traveled to Houston and met with government officials, and gone to historically black colleges and universities. Ultimately, though, they want to go to Washington and impact change nationwide.