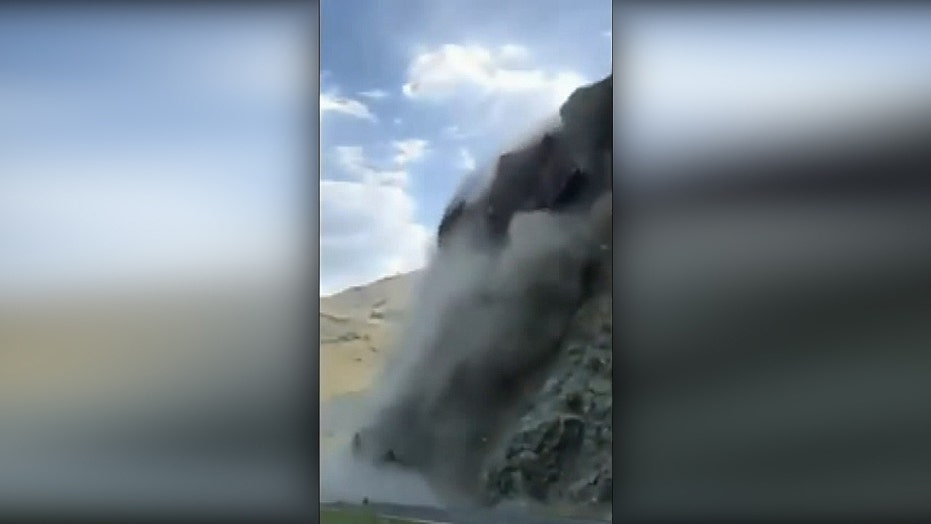 Rockslide crashes down on Idaho highway

An avalanche of rocks came tumbling down on U.S. Route 95 in Friday, blocking the highway indefinitely.

Motorists heading along a highway in Idaho on Friday got an unexpected surprise when a rockslide sent boulders tumbling down, blocking the route.

The Idaho Transportation Department (ITD) said in a news release the incident happened around 9 a.m. on U.S. Route 95 at milepost 188, between the towns of Pollock and Riggins.

The rockslide left a debris field approximately 120 feet long and 40 feet deep at the base. Some rocks measured 25 feet across and were reported to be "just as tall."

Carmen Escalera and her family were traveling along the roadway when they captured the dramatic scene on camera.

U.S. Route 95 in Idaho was blocked by a rockslide on Friday. (Idaho County Sherif's Office)

Initially, several rocks fell from the adjacent cliffside, followed by an avalanche of rocks.

Crews worked through the holiday weekend to try to reopen U.S. Route 95 in Idaho after a rockslide on Friday. (Idaho Transportation Department (ITD))

According to the Idaho County Sheriff’s Office, the route closed indefinitely on Friday, making north-south travel inaccessible to Fourth of July travelers.

ITD officials initially said they hoped to open a temporary roadway by Sunday, but discovered a crack in the rock face up above.

Crews worked through the holiday weekend to try to reopen U.S. Route 95 in Idaho after a rockslide on Friday. (Idaho Transportation Department (ITD))

Geotechnical surveys conducted on Monday showed "significantly less" movement on the slope, but officials were having outside experts examine the area to identify short-term and long-term options to stabilize the area.

“When survey results and on-slope evaluations prove that the slide is stable, we will look to open the highway for short periods of time,” Hopkins said in a news release. “In the meantime, we are evaluating the condition of Old Pollock Road to see how we may be able to help the county with a locals-only detour.”

A temporary roadway has been constructed around the slide, and barriers have been placed to protect drivers from any further rockslides.