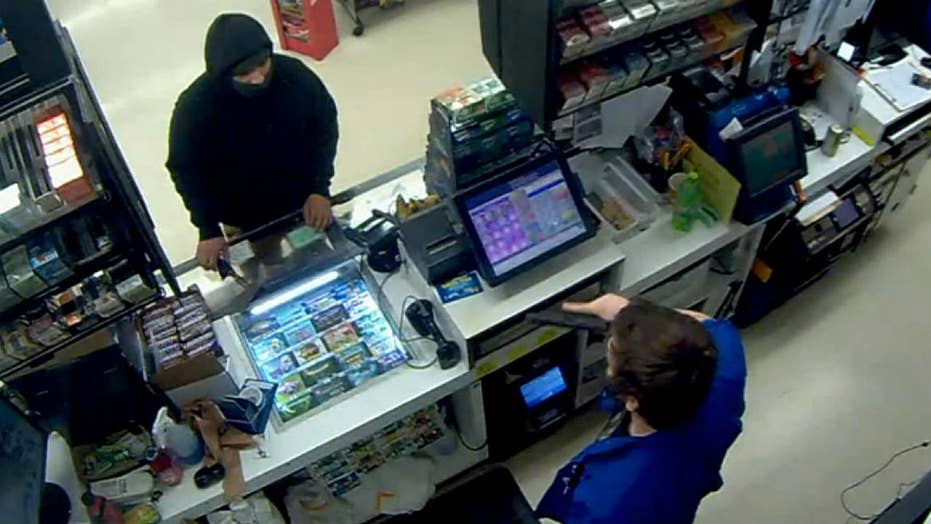 Oregon authorities are seeking a would-be thief who was armed with a hatchet when he tried to rob a convenience store, only to flee when the clerk drew a gun and called 911.

However, the clerk's quick thinking cost him his job, with the president of Plaid Pantry in Oak Grove explaining to local station KOIN-TV that the chain has a zero-tolerance policy for weapons.

He said employees are trained to de-escalate robbery situations to avoid injury, according to the station.

The Clackamas County Sheriff’s Office on Friday released surveillance video of the incident which took place April 28 at the store, seeking tips in identifying the suspect who fled empty-handed and without the 12-inch hatchet.

Image from surveillance video showing a convenience store in Oregon pulling out a gun on a masked would-be robber who had a hatchet. (Clackamas County Sheriff's Office )

“We’d like to reunite you with the hatchet you left behind after the clerk responded with a handgun and a 911 call and you fled the scene,” Sgt. Marcus Mendoza said in a news release.

Mendoza said the suspect placed the hatchet on the counter and reportedly telling the clerk, “I’m sorry. I’ll leave."

"The suspect got on his knees with his hands in the air, then abruptly fled the store," he said.