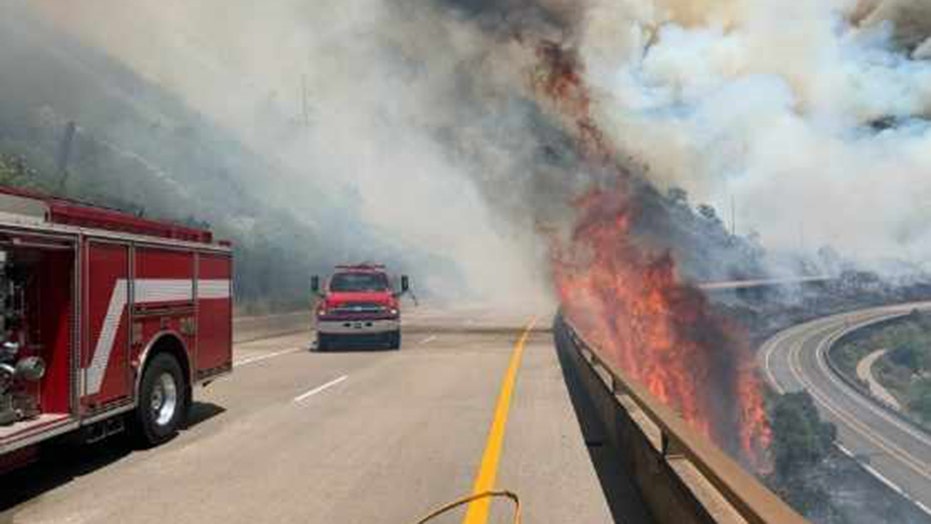 A major interstate in Colorado through the Rocky Mountains remains closed Tuesday as a wildfire continues to burn dangerously close to the highway.

The White River National Forest said the Grizzly Creek Fire has grown to 1,300 acres as it burns in Glenwood Canyon about 5 miles east of Glenwood Springs.

Officials said the fire was reported around 1:30 p.m. Monday and firefighters encountered "large active flames" in the median of Interstate 70 before the fire "took a run up" a nearby slope.

The wildfire led local fire officials to announce the closure of Interstate 70 in both directions as well as multiple exits, with photographs showing the fire reached the side of the highway.

Interstate 70 is now closed in both directions from Exit 116, Glenwood Springs, to Exit 140, Gypsum, according to the Colorado Department of Transportation (CDOT). Officials told FOX31 there's no estimated time when the interstate will reopen.

Most of the firefighting effort Monday afternoon took place from the air because of the rugged terrain and extreme fire behavior, according to fire officials.

On Tuesday officials said more than 120 firefighters are working the blaze, with more resources on the way.

"Firefighters are working to keep the fire out of the No Name drainage as well as on the north side of the Colorado River," officials said. "Terrain is very rugged, limiting where we can safely put firefighters on the ground."

Firefighters are working with aircrews to coordinate drop zones to fight the flames as they scout for locations to set up containment lines.

The cause of the fire is under investigation, and there are no immediate threats to structures and no evacuations are in place.

The Garfield County Sheriff's Office said that while there are no evacuations, residents in the area are asked to "maintain vigilance and be prepared to evacuate if necessary."

Firefighters on Tuesday may have a tough battle ahead as red flag warnings have been issued throughout the region for high fire danger.

A combination of high temperatures, low humidity and windy conditions bring an increased risk of fire and can lead to rapid wildfire growth.

Nine states, stretching from Colorado northwest to Washington, have some sort of fire weather advisory issued for Tuesday.

Low humidity, gusty winds, hot temperatures and worsening drought across the West will keep wildfire conditions critical across much of the region through midweek.