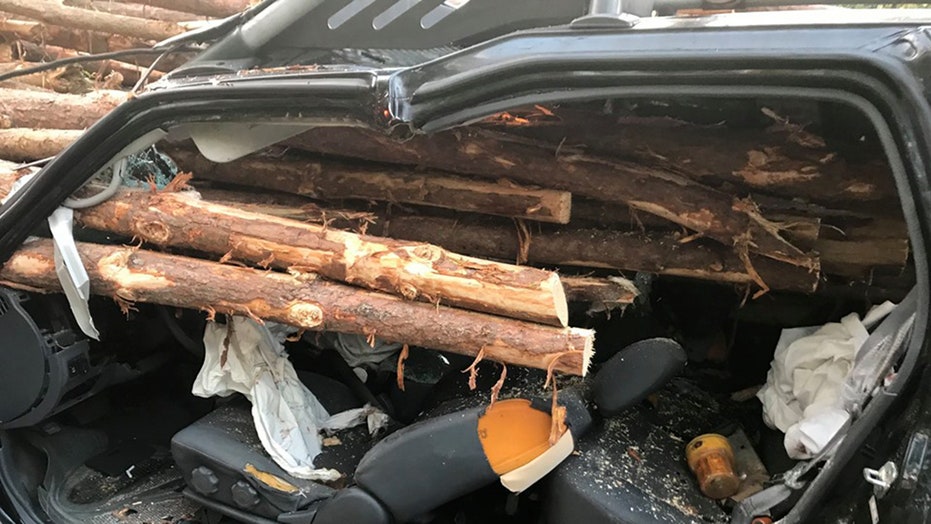 Talk about a near-miss.

A driver in Georgia miraculously survived after multiple logs from a logging truck smashed through the front of his SUV earlier this month.

The Whitfield County Fire Department shared photos of the incident on Facebook, saying it happened on Oct. 11 on Cleveland Highway.

Shocking images of the crash showed the logs lodged through the front window of the SUV and stretching the entire way through the vehicle.

A driver survived with "minor" injuries are logs from a logging truck pierced the an SUV in a crash earlier this month in Georgia. (Whitfield County Fire Department)

Dawn Fernandez, who came across the crash after it happened, said it "shook me to my core" and she had to pull over just past the scene of the crash to cry and pray for the occupants of the vehicle.

"In my earthly mind I knew there were no survivors. It haunted me all day today," she said in a comment on the fire department's post.

Fernandez said the fact that there was a survivor of the crash "shows the wonderful grace of our God."

"I will continue to pray for the occupant if the car," she wrote. "I am shocked once again to the core that he survived and of God's grace for this person."

In one of the photos released by the department, there appeared to be enough space for the driver to have survived in the driver's seat.

The logs came precariously close to the driver in the SUV. (Whitfield County Fire Department)

The photos also showed the extent of the damage, with logs stretching to the rear of the SUV, shattering the glass.

Another driver who came across the crash site said it "shook me to my core." (Whitfield County Fire Department)

The crash happened near the town of Cohutta, located about 25 miles southeast of Chattanooga, according to WTVC.

Officials have not released additional information about the crash, nor said if any charges will be filed.

The crash drew comparisons to a scene from the movie "Final Destination 2," which starts with a massive highway pileup that starts with logs falling off a truck.