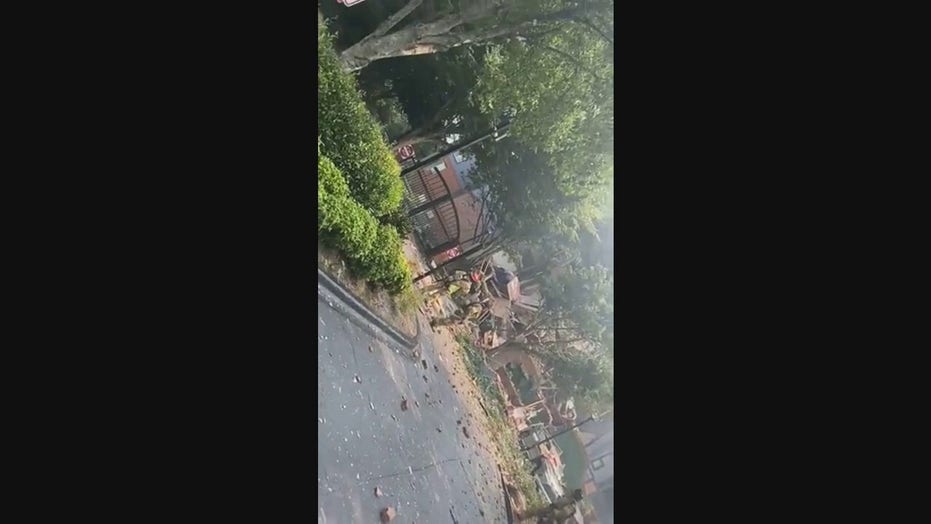 Explosion at Georgia apartment complex leaves some residents trapped, others with ‘severe burns’

An explosion broke out at an apartment complex in a northern suburb of Atlanta Sunday afternoon, injuring four people – including one who suffered severe burns, according to local reports and police.

The Dunwoody police department said it received multiple calls just before 1:30 p.m. regarding an explosion at the Arrive Perimeter apartment complex off Asbury Square.

Officer Robert Parsons told Fox News that some people were trapped inside the building and others – including one with "severe burns" – were transported to the hospital. Parsons said officers went into the building and detected a "strong odor of gas."

Two people were unaccounted for but have since been located, FOX 5 reported. As of 6 p.m., all residents were accounted for, according to the station.

A firefighter carries a ladder past the damaged leasing center following an apartment building explosion, Sunday, Sept. 12, 2021, in Dunwoody, Ga., just outside of Atlanta.  (AP)

A helicopter and drone circled above the three-story structure as the local Red Cross began canvassing residents to see who might need help finding accommodations. The building and several others nearby were evacuated. Residents were told that Monday was the earliest they could return to their homes.

The aftermath of the explosion.  (Dezmon Green)

Multiple law enforcement and fire agencies are on scene assisting in the rescue effort. Surrounding streets were closed off. Police asked anyone not affected by the explosion to remain in their homes during the rescue operation.

Atlanta Gas Light said crews were on-site assisting emergency responders. It said natural gas was turned off to the locations directly impacted by the incident and there were no additional service outages.

Eboni Thornton told WSB-TV that she was in a moving truck outside the building when it felt like something fell on top of the vehicle.

"The leasing office was collapsed on the left side, the double doors were blown out and I could hear a lady screaming her head off," Thornton said.

Thornton said she saw a couple of people limping and bleeding and being carried out of the rubble.

The official cause of the explosion is under investigation.

Dunwoody is about 20 miles north of Atlanta.