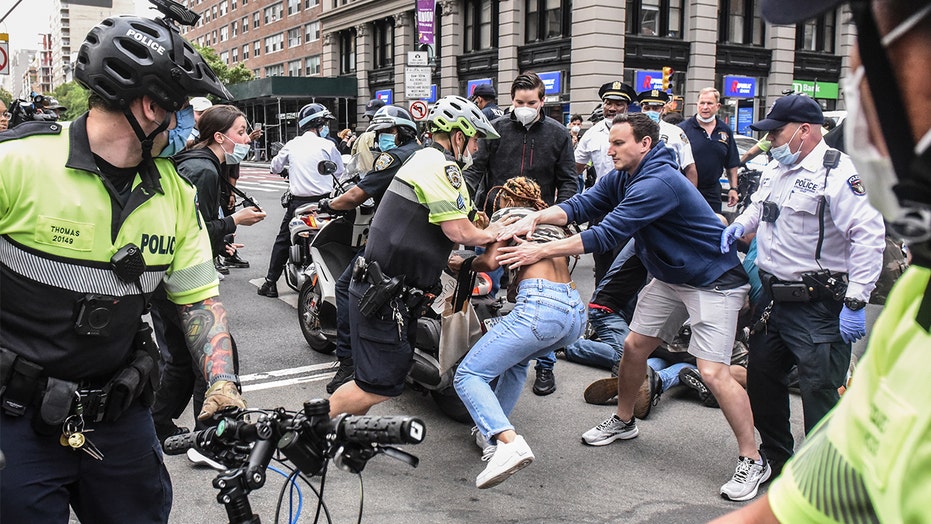 New York City police arrested more than 40 demonstrators Thursday evening after violent protests that followed the death of a man in police custody in Minnesota earlier in the week, police said.

Demonstrators turned out to protest the death of George Floyd, who died after an encounter with Minneapolis police on Monday. Video of the incident went viral and has led to protests around the U.S. -- including incidents of looting in Minneapolis and St. Paul.

The NYPD told Fox News that multiple officers sustained injuries, including one who was struck in the head with a garbage can and another who was punched in the face.

Some protesters spit at officers -- despite mandates to wear a mask in public and practice social distancing in the city hit hardest by the coronavirus pandemic.

Another protestor attempted to remove an officer's gun from its holster, a police spokesperson told Fox News.

"Peaceful protest is always the best way to protest," the spokesperson urged.

In total, the FDNY confirmed to Fox News four police officers were injured and transported to nearby hospitals.

Police detaining a protesters in New York City as tensions escalated over the death of George Floyd. (Stephanie Keith/Getty Images)

One woman who was arrested allegedly was carrying a knife, police said.

Some of the protesters hurled bottles at officers, resulting in more than five arrests near Union Square Park, the New York Post reported. As the day went on, the marchers moved downtown and the number of protesters arrested continued to climb, with police confirming that more than 40 people had been arrested by 9:30 p.m.

Those arrested included the individual who allegedly threw a garbage can at an officer's head and another person accused of punching a female NYPD inspector in the chest.

An abundance of videos shared on social media showed protesters clashing with police, as well as scenes of more peaceful marching and chanting.

In some videos, the crowd could be heard chanting “Black lives matter” or “Hands up, don’t shoot.”

Demonstrations continued as the sun went down, with throngs of people packing the streets in various parts of Manhattan.

In one video, a police officer holding a camcorder repeatedly told protesters to “back up” as other officers made an arrest behind him and a swarm of masked, young people surrounded them.

Although most of the protesters and police officers could be seen wearing face masks, many in the crowd appeared to flout the city’s social-distancing guidelines amid the coronavirus pandemic.

Protesters shouting at police during a rally against the death of George Floyd in New York City. (Stephanie Keith/Getty Images)

One Twitter user noted the irony, writing, “very hard to social distance on the steps,” along with a photo that showed a throng of people outside a city building.

“This is not acceptable anywhere,” he tweeted about Floyd’s death.

Protests have broken out in other cities as well.

Fox LA journalist Bill Melugin tweeted a video Thursday evening that showed a crowd of protesters surrounding a California Highway Patrol cruiser in the middle of the street. At least one person kicked it as multiple people shouted profanities.

In Denver, at least five gunshots rang out near a protest at the Colorado state Capitol, officials said; no injuries were reported.

Local and federal investigations were underway in Minnesota into the police officers’ handling of Floyd’s arrest, and U.S. Attorney Erica MacDonald said Thursday that both President Trump and Attorney General Bill Barr actively were monitoring the situation.

In a separate incident in New York this week, a white woman called the police and claimed she was being "threatened" by "an African-American man" in Central Park.

That man, who was in the park birdwatching when he said he asked the woman to leash her dog in an area that required dogs to be restrained, recorded the incident and posted it to social media, where it went viral.

The woman wound up losing her job and forfeiting her dog to an animal rescue.