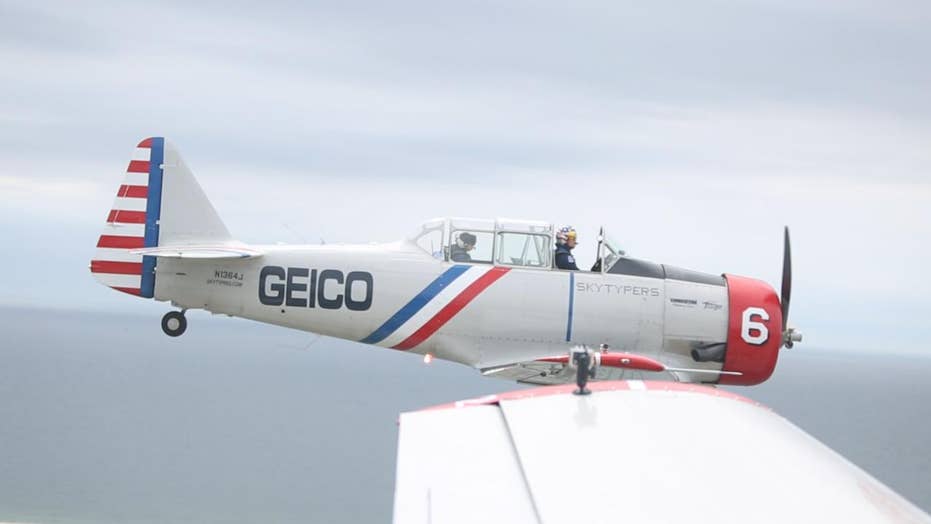 Fox News goes on board with the Geico Skytypers for fly-over to celebrate upcoming Memorial Day, D-Day anniversary.

A “seat of the pants flying” maneuver that many would consider too close for comfort is just another part of the routine for the Geico Skytypers.

Larry Arken, the air show team’s commanding officer, has his eyes fixated on a Douglas C-47 to his left, only about 50 feet away from the cockpit of his restored World War II-era aircraft. And even closer to his right, pilot Tom Daly – flying in one of three other North American SNJ-2s alongside Arken -- is bobbing up and down as he remains locked in formation.

Together, the five planes – occupying a crowded space less than the size of a football field – majestically roar past the Statue of Liberty and make repeated turns in New York Harbor to commemorate the upcoming Memorial Day and 75th anniversary of D-Day.

“What a better place than that to celebrate our freedom,” Arken said on Thursday about an hour before the special moment, which Fox News was given a backseat ride in his plane for. He made note of the symbolic presence of the Douglas C-47 provided by the American Airpower Museum – a military transport plane used to drop American paratroopers into Normandy on D-Day.

The Geico Skytypers and a Douglas C-47 military transport plane fly by the Statue of Liberty Thursday.

The two upcoming dates paying tribute to America’s brave men and servicewomen hold special meaning to the pilots of the Skytypers. Many of them have honed their aviation skills from decades of experience flying missions in the Navy and Air Force. Others come from families whose members have fought in America’s greatest conflicts.

Daly, a pilot who participated in the Statue of Liberty fly-by Thursday with Arken, Chris Orr and Mike Brockey, says his father was a turret gunner on a Douglas A-20 Havoc during World War II, ending up in New Guinea and Okinawa. His two brothers fought in the Vietnam War – one as a Green Beret with the famed 5th Special Forces Group.

“A lot of people don’t realize the sacrifices that have been made by families,” he said. “As the Geico Skytypers, we visit air shows all over the country and we meet these people and I think that the world needs to know the sacrifices they make. Their families split apart so that they can lead this country, defend our country overseas and defending other people overseas as well.”

During a symbolic flight hosted by the American Airpower Museum on Long Island, the Skytypers flew by the Statue of Liberty alongside a Douglas C-47 -- a military transport aircraft used to deploy paratroopers during D-Day. (Alex Quiles/Fox News)

The Skytypers fly vintage SNJ-2 planes, now restored and updated with some modifications after originally being used to train Allied pilots during World War II.

Getting the opportunity to ride in the back seat of one is best described as a raw and exhilarating experience.

From the moment the plane’s 550-horsepower engine fires up, the smell of fuel fills the air and strong gusts of wind generated by its propeller start swerving in and out of its partially-open canopy.

Once up in the sky, the pilots use delicate, subtle movements to keep the planes in formation. They rarely shift their vision away from other teammates and fly as close as 30 feet apart.

All this happens as the world inches away from your helmet, in the opened and completely exposed parts of the SNJ-2’s canopy, races by at speeds of more than 150 mph.

The Geico Skytypers fly a restored SNJ-2 plane -- also called a T-6 Texan by the Army Air Corps -- that originally was produced to train Allied pilots during World War II. Each plane is equipped with a system that can release streams of smoke to 'type' messages in the sky. (Alex Quiles/Fox News)

Orr, a former F-14 Tomcat pilot who completed 35 combat missions in Iraq, says the road to becoming a Skytyper takes years of training.

“You study. You know every single thing that you are going to do – every single radio call, where to look for everybody,” he told Fox News.

Prior to the shows, Orr says the six members of the team that are performing will spread out on concrete and walk around, pretending they are running through the 18-minute routine. The lead plane is equipped with a tablet that will send software signals to the other planes to release streams of smoke, allowing them to display messages in the air.

The upcoming holiday of Memorial Day and the 75th anniversary of D-Day hold special meaning to the Skytypers, as many of them have military backgrounds with family members who have served in combat. (Alex Quiles/ Fox News)

But at the end of the day, Orr says, “it’s still seat of the pants flying.”

"This is just the greatest plane. It’s got this big, old radial motor," he said. "You fly with the canopy back… you land and can’t see anything in front of you because the motor’s so big.”

The Geico Skytypers – based in New York’s Long Island -- are set to perform this Memorial Day weekend at the Bethpage Air Show in Jones Beach, before heading to Tennessee and Ohio in June.

Arken says the team loves “the ability to be able to show off these World War II airplanes to the people.

“And we love to inspire kids because they watch aviation and hopefully they decide to do a path in aviation,” he added.