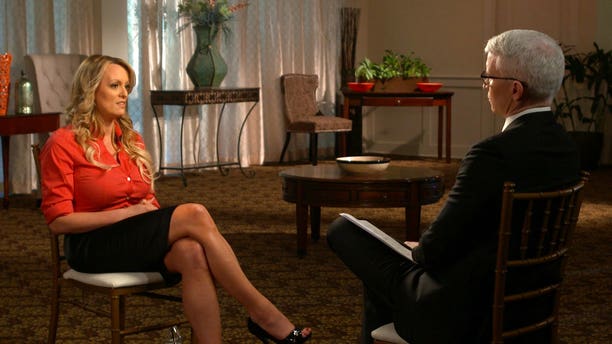 This image released by CBS News shows Stormy Daniels, left, during an interview with Anderson Cooper which will air on Sunday, March 25, 2018, on "60 Minutes." (CBS News/60 Minutes via AP)

THE LEAD STORY - STORM CLOUDS: Adult film star Stormy Daniels claimed she agreed to keep quiet about her alleged affair with President Trump after she received a threat in a parking lot and worried that her infant daughter would be harmed, according to a “60 Minutes” interview that aired Sunday ... Daniels, whose real name is Stephanie Clifford, said she was threatened by a man who approached her in Las Vegas after she sold her story about her alleged 2006 sexual encounter with Trump during the American Celebrity Golf Tournament in Lake Tahoe. "I was in a parking lot going to a fitness class with my infant daughter and a guy walked up on me and said to me, ‘Leave Trump alone. Forget the story,’” she said. “And he leaned round and looked at my daughter and said, ‘That’s a beautiful little girl. It would be a shame if something happened to her mom.’” Trump has strongly denied Daniels's claims of an affair. InTouch magazine initially bought her story for $15,000 but opted to kill it after Trump’s personal lawyer, Michael Cohen, threatened to sue the publication.

BLOATED MARCH NUMBERS?: Organizers of the March for Our Lives demonstration in Washington, D.C. claimed Sunday that some 850,000 people attended the pro-gun control event, but an imaging company said the turnout was much less ... Virginia-based Digital Design & Imaging Service Inc., which uses aerial photos to calculate crowd sizes, reported the event’s peak crowd size was at 202,796 people around 1 p.m., CBS News reported. The firm said the number's margin of error is 15 percent. The January 2017 Women's March turnout in Washington, for comparison, was estimated at 440,000 people.

RUSSIA OBSESSION ENSNARES BOLTON: Incoming national security adviser John Bolton defended himself Sunday after Hillary Clinton's former vice presidential running mate questioned whether he would be able to obtain the necessary security clearance over a video speech given to a Russian pro-gun rights group in 2013 ...  On Saturday, Sen. Tim Kaine, D-Va., tweeted out a National Public Radio report about the group Bolton spoke to, known as The Right To Bear Arms. The NPR report described one of the group's founders, Alexander Torshin, as an ally of Russian President Vladimir Putin who served as the deputy speaker of Russia's parliament for more than 10 years. On Sunday, a spokesman for Bolton responded: "The Ambassador [Bolton] was asked by former [National Rifle Association] president Dave Keene to record a video for presentation to the upper house of the Russian parliament, the Federation Council. The Ambassador has never heard of The Right to Bear Arms until recent news coverage of the group."

REMINGTON OUT OF AMMUNITION?: Firearms manufacturer Remington Outdoor Company has filed for bankruptcy protection in the face of falling sales and lawsuits stemming from the 2012 Sandy Hook Elementary School shooting, the Wall Street Journal reported Sunday night ... According to the Journal, Remington announced that it would file for Chapter 11 last month but the actual filing was delayed after the Feb. 14 shooting at Marjory Stoneman Douglas High School in Parkland, Fla. that killed 17 people. The paper reported that Remington officials plan to hand over the reins to its creditors in exchange for writing off most of the company's debt. Cerberus Capital Management LP bought Remington for $118 million in 2007, assuming $252 million in debt in the process.

FACEBOOK CO-FOUNDER TRIES TO MAKE-UP WITH FRIENDS: Facebook co-founder and CEO Mark Zuckerberg took out full-page advertisements in major U.S. and British newspapers to apologize for a "breach of trust" after it was discovered Cambridge Analytica improperly harvested user data ... The ads, which were taken out in papers including The New York Times, The Washington Post, Wall Street Journal and the U.K.'s The Observer, The Sunday Times and The Sunday Telegraph, featured a signed apology from Zuckerberg and an explanation of what the social media giant was doing to fix the situation. Facebook's privacy practices came under fire after accusations emerged that Cambridge Analytica, a political consulting firm affiliated with President Trump's 2016 campaign, inappropriately obtained data.

Consider yourself an Influencer? Become a trusted advisor in our FOX News community and help guide our brand’s future. Click here to find out how.

Fill out our qualification survey and join us. Thank you for your continued support in our company’s growth.

AS SEEN ON FOX NEWS WEEKEND

'WITHOUT ARMS IN A SEA OF SHARKS': "The omnibus bill that Republicans gave President Trump is a total betrayal of him and those who elected him."– Judge Jeanine Pirro, in her "Opening Statement" on "Justice with Judge Jeanine," ripping House Speaker Paul Ryan and Senate Majority Leader Mitch McConnell for the $1.3 trillion "omnibus" spending bill they shepherded through Congress. WATCH

CELEBRATING MCCABE 'BEING HELD ACCOUNTABLE': "I went through hell for a year and a half. Andy made sure I couldn't get out of the division." – Former FBI counterterrorism agent Robyn Gritz, on "Fox & Friends Weekend," explaining why she celebrating former FBI Deputy Director Andrew McCabe's firing. WATCH

Texas teen was beaten, had hot cooking oil poured on her after refusing arranged marriage: Police.

Murder suspect on 'jihad' against US policy in Middle East admits to N.J. armed robbery.

Bucking the 'Blue Wave' -- Republicans would be smart to focus on Hispanic voters in 2018.

I was a committed atheist and then this incredible thing happened to me.

The one thing single parents wish you knew.

'Black Panther' falls to 'Pacific Rim: Uprising' but is still the highest-grossing superhero film ever.

Fox & Friends, 6 a.m. ET: Washington Times columnist Charlie Hurt reacts to polling that shows GOP narrowing the gap among potential voters ahead of midterms; plus, reaction to the hero police officer who made the ultimate sacrifice during terror attack in France. An inside look at the weekend's "March for Our Lives" rallies with CampusReform.org's Cabot Phillips. A look at the New York International Auto Show. And Gary Sinise opens up about how his foundation is helping military families.

Tucker Carlson Tonight, 8 p.m. ET: Tucker dissects the mainstream media's coverage of the "March for Our Lives" events over the weekend.

The Fox News Rundown podcast: The Trump administration is not slowing down in pushing the president’s agenda, despite multiple lawsuits against him and the firing of top members of his team. Fox News contributor Guy Benson provides insight. Plus, commentary by 'The Five" co-host Juan Williams.

The Brian Kilmeade Show, 9 a.m. ET: New York Post columnist Michael Goodwin on why Trump's recent White House shakeups show he is putting America first. David Bossie on Trump picking John Bolton as his new national security adviser and more potential administration changes ahead; Dana Perino on the Stormy Daniels "60 Minutes" interview and the fallout from the "March for Our Lives" protest events. Mark Ciardi, executive producer of "Chappaquiddick," gives a behind the scenes look at the making of the new movie.

1979: A peace treaty is signed by Israeli Prime Minister Menachem Begin and Egyptian President Anwar Sadat and witnessed by President Jimmy Carter at the White House.