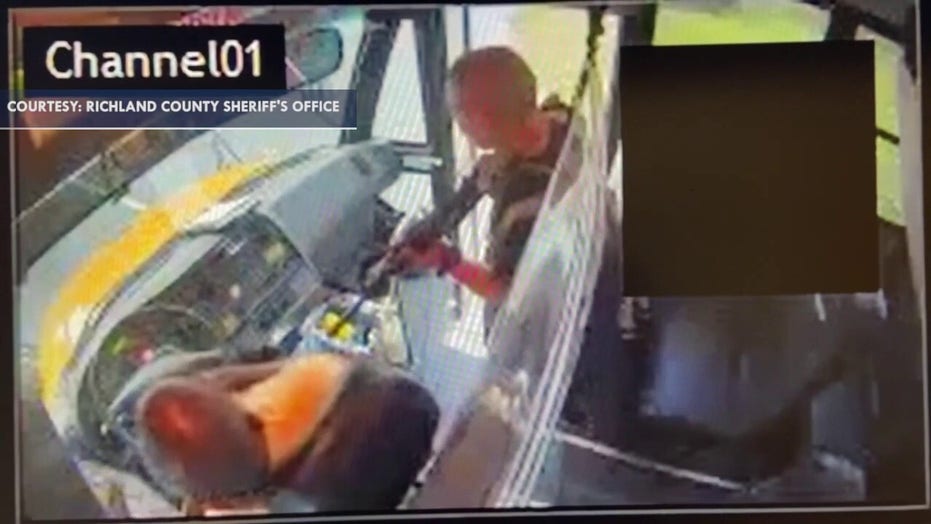 A trainee from Fort Jackson in South Carolina has been arrested after he fled from the base and hijacked a school bus while carrying his gun, officials said.

A trainee from Fort Jackson in South Carolina has been arrested after he fled from the base and hijacked a school bus while carrying his gun, officials said.

Fort Jackson's commander, Brig. Gen. Milford Beagle Jr., said that the trainee, 23, was reported missing at about 7 a.m. Thursday, leading to a suspension of drills while the base scrambled to locate him. Authorities identified him later in the day as Pvt. Jovan Collazo.

Richland County deputies said at some point he abandoned his government-issued M-4 carbine rifle before they arrested him. The Army said he had no access to ammunition.

Prior to his arrest, the trainee had fled to nearby Highway 77, where he boarded a school bus and allegedly took control of it. He released the driver and the children on board.

Richland County Sheriff Leon Lott said Thursday that the suspect brought the kids to the front of the bus, and their questions frustrated him. The bus stopped shortly after that, letting off the 18 elementary school students and the driver.

None of the students or the bus driver was harmed during the incident, but schools in the area went into a "lockout" as a precaution, WIS News 10 reported.

The trainee then drove a mile further down the road before abandoning the bus and his rifle, officials said.

Fort Jackson officials have said they are cooperating fully with the Richland County Sheriff’s Office, which is leading the investigation and has Collazo in custody.

Beagle Jr. told reporters that base officials believe that the trainee escaped by jumping a fence, topped with barbwire, which was not heavily monitored. He said the area around the base is "heavily forested."

He also noted that the trainee’s actions open him up to disciplinary action, in addition to his civilian actions, such as going AWOL (absent without official leave) or theft of a weapon. Collazo's family has been informed of the serious charges against him, Fort Jackson said in a statement.

The base is also conducting its own investigation into the matter.

Trainees are not allowed to start weapons training until their fourth week, and they face "shakedowns" to make sure they have no ammo on them when they leave the firing range. The trainee had his gun but was a week away from even starting his training, according to officials.

Beagle Jr. said that the trainees often experience "a certain anxiety" in the early weeks after arriving at the base.

SOUTH CAROLINA TO BRING BACK FIRING SQUADS FOR EXECUTIONS

"He’s been in training only for three weeks at this point," Beagle Jr. told reporters at a news conference Thursday. Beagle Jr. also said that the trainee had been known to be "very quiet" and had no disciplinary actions prior to the incident.

"We believe he was just trying to make an attempt to go back home, nothing more sinister," he added.

Beagle Jr. noted only "a few times" in the past that trainees have actually fled from the base, but "never with a weapon."

He expects the trainee will be "separated permanently" from the service.

"Rarely will you see an individual let back in after an AWOL action," Beagle Jr. said. "That’s not in line with our Army values, and you’ll see that individual separated permanently."