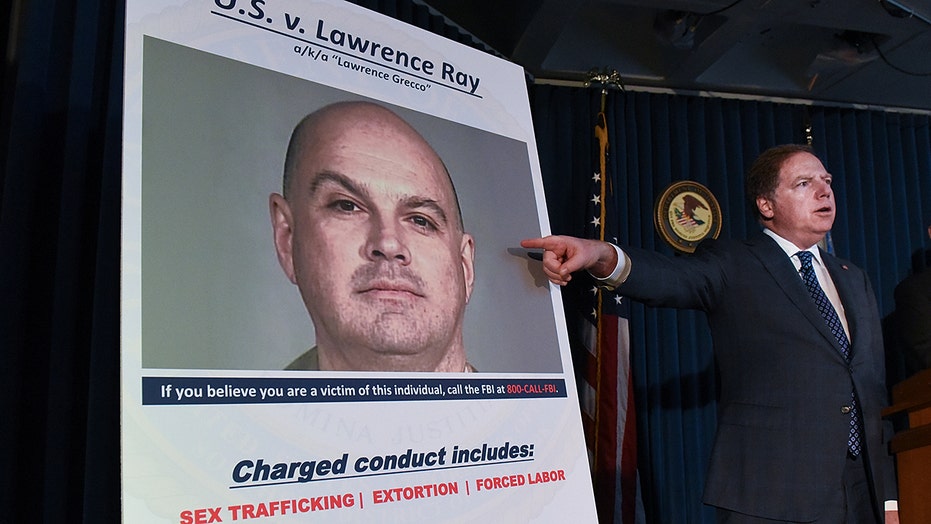 The father of a former student at Sarah Lawrence College in New York was arrested Tuesday after he was accused of running a sex cult out of his daughter's dorm room.

Lawrence Ray, 60, an ex-convict whose was the best man at the wedding of former New York Police Commissioner Bernie Kerik, was charged with nine counts of sex trafficking, extortion, forced labor and money laundering, authorities said.

He was arrested at his home in Piscataway, New Jersey. He would face life behind bars if convicted.

Investigators said at a morning news conference that Ray drained $1 million from the bank accounts of college kids, while subjecting them to psychological torture. The cult included forced labor, prostitution, and mentally and physically abusing his male and female victims, prosecutors said.

"Ray put a knife to one male victim's throat, brandished a knife and threatened to dismember another male victim, grabbed a third male victim around the neck until he passed out, slapped a female victim and grabbed another female victim by her head before shoving her to the ground," Geoffrey Berman, the United States attorney for the Southern District of New York, said. "After enduring Ray's abuse, seven of his victims falsely confessed to having harmed or attempted to harm Ray. Ray, who sometimes recorded these false confessions, then used these false confessions to extort money from his victims."

Investigators said some of Ray's alleged victims "drained hundreds of thousands of dollars from their parents' savings accounts at Ray's direction" while others opened lines of credit or solicited contributions from acquaintances.

"Ray used fear, violence and coercion to induce one young victim to engage in commercial sex acts to repay debts she did not actually owe," Berman said. She reportedly worked as a prostitute for more than four years while giving Ray the proceeds from her forced prostitution, exceeding more than $500,000.

"Beginning when she was just a college student, Ray sexually groomed this victim, collecting sexually explicit photographs and other personal information he then used to coerce her into engaging in commercial sex acts," Berman said, adding that Ray also used physical violence.

"Ray sexually groomed this victim, collecting sexually explicit photographs and other personal information he then used to coerce her into engaging in commercial sex acts."

— Geoffrey Berman, the United States attorney for the Southern District of New York

"Ray tied this victim to a chair, placed a plastic bag over her head and almost suffocated her," he said.

Prosecutors alleged that Ray also used violence, food and sleep deprivation against three female victims and forced them to perform extensive physical labor on a family member's property in North Carolina, "sometimes forcing them to work in the middle of the night, all for no pay."

"The conduct alleged here is outrageous," William Sweeney, assistant director-in-charge of the FBI in New York, said. "It makes you angry. If you're not angry, you don't have a soul."

The investigation that led to the latest charges against Ray was prompted by an article in New York magazine called "The Stolen Kids of Sarah Lawrence" that takes a look at what happened to the college students Ray is accused of manipulating.

In it, Ray's daughter, Talia Ray, had been in charge of organizing housing for a group of her friends during their sophomore year at Sarah Lawrence. They settled on Slonim Woods 9, a two-story brick dorm in the middle of campus.

In September 2010, Talia told her roommates at the private Westchester County university that her father was getting out of prison and needed a place to stay. They agreed and soon Ray became a very dominant part of their lives, presenting himself as a "father figure," preaching about his "personal philosophy" and conducting bizarre therapy sessions.

In a statement to Fox News, Sarah Lawrence College called the charges outlined in the indictment "serious, wide-ranging, disturbing and upsetting."

College officials said they had conducted an internal investigation following the allegations in the New York magazine article, but "the investigation did not substantiate those specific claims."

They added that the Southern District of New York had not contacted them, but they "will, of course, cooperate in their investigation to the full extent of the law if invited to do so."

Ray previously had played a role in a scandal involving Kerik, a former police driver for Rudy Giuliani, President Trump's personal lawyer, while he was mayor. Kerik became New York City’s corrections commissioner in 1998 and then its police commissioner from 2000 to 2001, serving during the 9/11 attacks.

Kerik had been on the shortlist for President George Bush's homeland security secretary in 2004 but his name was withdrawn quickly as the nominee following a background check.

Two days later, The Daily News reported that Ray, who had been the best man at Kerik’s wedding, had come forward with evidence that Kerik failed to report thousands of dollars in gifts he’d received while working for the city. At the time, Ray was under indictment in a $40 million stock scam.

Kerik ultimately served nearly four years in prison for tax fraud, making false statements and other charges related to gifts he accepted from companies looking for favors, including a construction firm that wanted his help getting a city license.

In an email to Fox News, Kerik said he hadn't spoken to Ray in nearly two decades, adding that he wished the FBI and the Justice Department "realized what a conman he was prior to making him a superstar witness against me."

"In their zeal to destroy me and my family, they ignored his lies, deceit and inconsistencies," Kerik said. "Hopefully, this indictment will be the end of his reign of terror on everyone he has conned, manipulated, or deceived, and the children he has hurt."