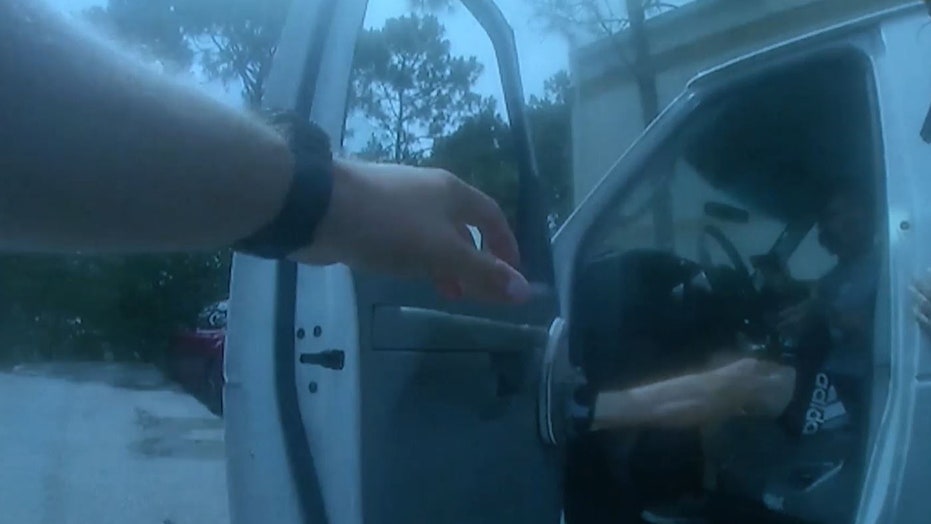 A Florida suspect is facing several charges after he allegedly fired at two St. Petersburg police officers over the weekend, nearly striking one of them in the head.

"If Officer Kuznetsov's head had been tilted slightly to the left, or he had taken one more step before he stopped, there's no doubt that he would have been shot in the head," Pinellas County Sheriff Bob Gualtieri said during a news conference Tuesday.

The shooting occurred Saturday after Officer Ronald McKenzie and Officer Pavel Kuznetsov were attempting to locate the suspect, Austin Kingos, 23, who authorities said had probable cause for his arrest on a misdemeanor charge of violation of an injunction for stalking. The officers arrived at an area of St. Petersburg where they noticed a white van with Kingos inside.

WISCONSIN MAN GETS 20 YEARS FOR KILLING SON, 5, IN FIGHT OVER SLICE OF FATHER'S DAY CAKE

On Tuesday, the sheriff's office played dashcam and body cameras footage of the incident, which appeared to show the struggle between Officer McKenzie and Kingos.

"Officer McKenzie asked him for identification. Kingos did not immediately produce any ID and he was fidgeting around, and Officer McKenzie was concerned because of the movements and he couldn't see Kingos' hands," Gualtieri said. "He opened the driver's side of the door, at which time Kingos turned and began to actively kick and resist Officer McKenzie."

Soon after, Kingos pulled a semi-automatic handgun from his waistband and allegedly fired at the officers, the sheriff's office said, in a news release. The suspect then fled the scene on foot.

"Kingos fired a round and as described by Officer Kuznetsov, ‘It literally whizzed by his head,’" Gualtieri said, according to FOX 13 Tampa Bay. "He said he could hear the round whizz by his head. It was that close."

OAKLAND POLICE CHIEF RESPONDS TO CITY SLASHING PD BUDGET AMID CRIME SURGE: ‘WE HAVE A CRISIS ON OUR HANDS’

Just 29 seconds went by from the time McKenzie exited his cruiser until Kingos allegedly fired his gun at the officers, according to authorities. The sheriff noted that Kingos' gun jammed, which may have prevented the suspect from firing additional rounds.

"[If not for that] gun jamming he would have fired several more rounds, and we of course don't know what that outcome would have been – it may not have been good," Gualtieri said.

Around that time, Officer McKenzie fired his weapon, striking Kingos in the lower leg. Officers followed Kingos and he was taken into custody.

While in custody, the officers immediately rendered first aid to Kingos until paramedics arrived, the sheriff's office said.

Kingos will be charged with one count violation of injunction for protection and two counts of attempted murder on a law enforcement officer, according to authorities.

The incident will be investigated by the Pinellas County Use of Deadly Force Investigative Task Force, created to ensure the investigations conducted into law enforcement use of deadly force are "thorough, complete, and objective."

The officers involved in the shooting will be placed on paid administrative leave, the sheriff's office said.