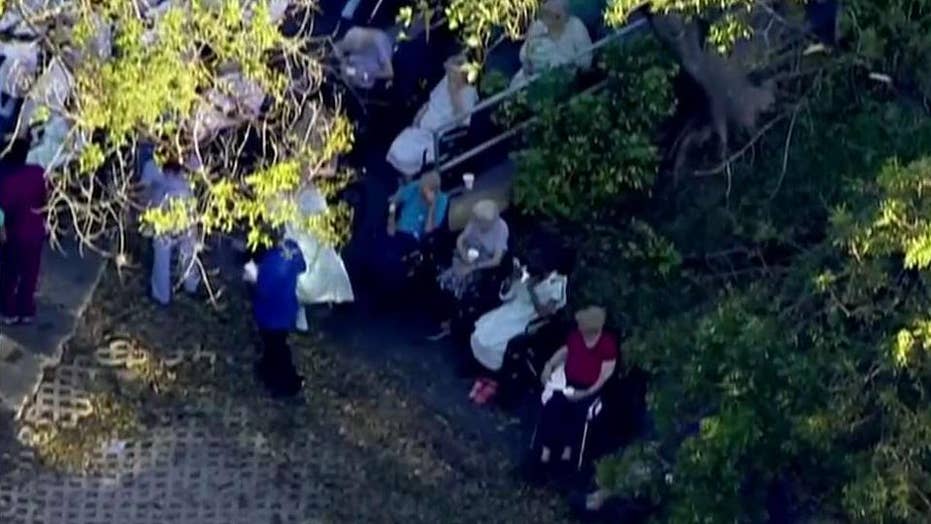 Four employees of a Florida nursing home where 12 patients died after Hurricane Irma knocked out power in 2017 were taken into custody on Monday and face charges of aggravated manslaughter, according to lawyers tied to the case.

Althia Meggie, 36, of Broward County surrendered to police around noon on Monday after Meggie and three other employees were notified last week “that charges were being brought," her attorney told Fox News. Former home administrator Jorge Carballo, 62, was also charged in the case and reportedly was one of those who surrendered to the authorities. (Broward County Sheriff's Office)

Althia Meggie, 36, of Broward County, surrendered to police around noon on Monday after she and three other employees were notified last week “that charges were being brought,” Meggie’s attorney, Lawrence Hashish, told Fox News.

He said Meggie, who was a per diem nurse at the Florida nursing home and was asked to work because there was a shortage of employees at the facility after the hurricane, has been charged with two counts of aggravated manslaughter and two counts of tampering with or fabricating evidence.

Three of the four who were charged surrendered to Hollywood police on Monday, Hashish said. He said some will face up to 12 counts of aggravated manslaughter. All four were employed by the Rehabilitation Center at Hollywood Hills at the time of the deaths.

Hashish said the fourth person charged in the case is a nurse whom he did not represent, who was in custody in Miami-Dade County. Arrest records confirmed the 31-year-old nurse was behind bars in that county and was charged with aggravated manslaughter and tampering with evidence. The North Miami Beach Police Department arrested her Saturday on a warrant issued in Broward County, Miami-Dade police told Fox News.

Hollywood Police did not immediately respond to Fox News’ request for comment.

Paramedics transporting a woman from the Rehabilitation Center at Hollywood Hills after a loss of air-conditioning due to Hurricane Irma in Hollywood, Fla., in September 2017.  (Amy Beth Bennett/South Florida Sun-Sentinel via AP, File)

Patients started dying days after Hurricane Irma swept through the area in September 2017, knocking out power at the nursing home.

Twelve of those deaths were ruled homicides due to heat exposure, and two other people died from causes not related to the heat, The Sun Sentinel reported.

Investigators said workers at the facility did not evacuate patients as temperatures inside started rising, even though a fully functional hospital was across the street.

Police at the south entrance of the Rehabilitation Center at Hollywood Hills where residents died, in September 2017. (Charles Trainor Jr./Miami Herald via AP, File)

One of the patients had a temperature of 107.5 degrees, according to Fire Lt. Amy Parrinello with Hollywood Fire-Rescue, who added that it was the highest she had ever seen in her 12-year career. Parrinello said another patient topped that with a temperature so high it couldn't be measured.

The nursing home's license was suspended days after the storm and it later closed.

Carballo’s attorney, James Cobb, did not immediately respond to Fox News request for comment but told The Associated Press his client and other administrators were told repeatedly before the storm that they could call then-Gov. Rick Scott's personal cellphone for help. Cobb said they called five times but never heard back. Scott, a Republican, is now a senator.

Cobb reportedly said the administrators “sat there languishing waiting for the cavalry to come. ... They never, ever came.”

In a statement, Scott said that the nursing home should have called 911.

“Nothing can hide the fact that this healthcare facility failed to do their basic duty to protect life,” he said. “We took steps in Florida to protect our most vulnerable, including requiring all nursing homes and assisted living facilities to have emergency backup power, to ensure a tragedy like this never happens again.”

Hashish told Fox News “no crimes were committed,” adding that his client “did not neglect any of her patients.”

“My client and the people she was working with were caring for residents under natural disaster conditions created by Hurricane Irma, no one could have anticipated the tragedy to come and as always hindsight is 20/20,” Hashish said. “The real crime is that the state is looking to blame selfless caregivers. The evidence will show no crimes were committed.”

He added, “If Hollywood police believed that this was negligent, they would have brought charges 22 months ago, so we are surprised by the timing of it.”

Hashish said his client, another nurse and Carballo made their first court appearances on Tuesday in Broward County.

Hashish said on Tuesday bond was set at 7500 per count for the aggravated manslaughter charge and 1000 for tampering with or fabricating evidence.