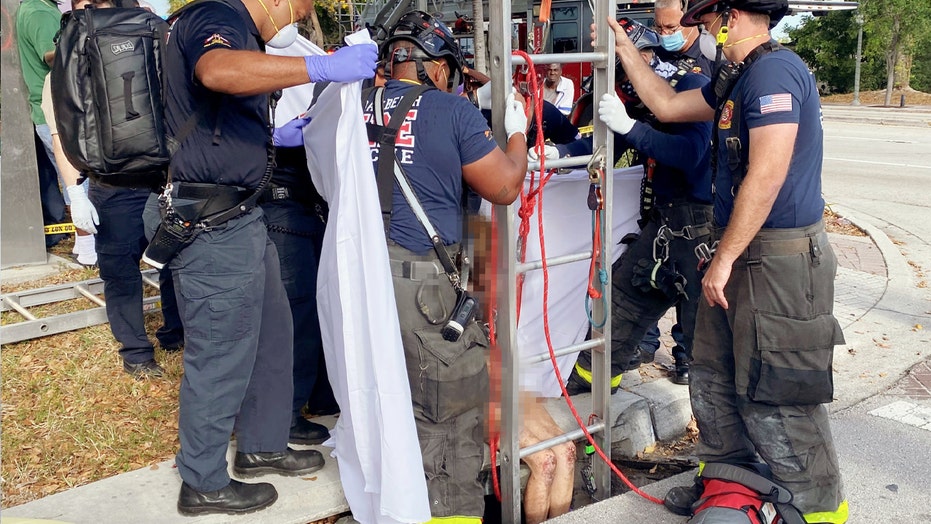 A naked Florida woman was rescued from a Delray Beach storm drain Tuesday after becoming trapped for an unknown length of time, authorities said.

Crews dropped a ladder and harness down the drain to lift her out after a passerby heard someone calling for help from below.

Only a pair of scuffed, bloody knees can be seen of the victim before she’s loaded onto a stretcher en route to a hospital for medical treatment. (Delray Beach Fire Rescue)

But after the rescue, authorities learned she had been missing for weeks, the Sun Sentinel reported. It’s unclear how long she was trapped – or what happened to her clothes.

First responders held up a sheet for the victim's privacy as onlookers cheered her rescue. (Delray Beach Fire Rescue)

"She was lucky," Delray Beach Fire Rescue spokesperson Dani Moschella told the paper. "I don’t know how much longer she would have been OK down there. The idea that somebody might be down there for any length of time is disturbing. It’s dirty, dangerous, there’s snakes, rats, garbage, dirt and leaves, anything that’s on the street that washes into a sewer, and it smells terrible."

Images of the operation shared on Facebook by Delray Beach Fire Rescue show first responders holding a sheet around the drain for her privacy.

Only a pair of scuffed, bloody knees can be seen of the victim before she’s loaded onto a stretcher en route to a hospital for medical treatment.

Local police were looking into how the woman wound up in the drain and how long she was there.