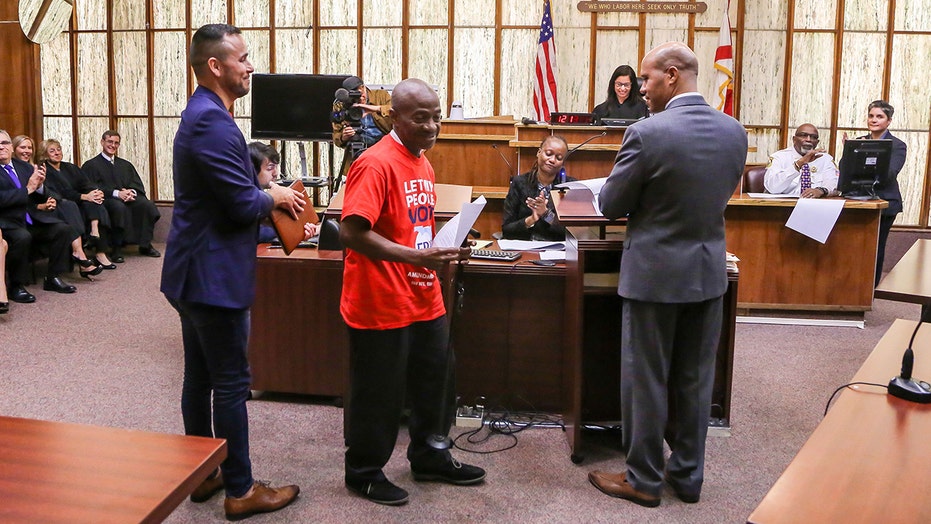 A law aimed at carrying out the amendment has sparked legal battles that remain unresolved, the state has provided little guidance to local elections officials, and some counties are filling the void with inconsistent remedies. Many people with felony records say they aren’t sure how to meet requirements they face and fear running afoul of the law by registering to vote.

Amid the uncertainty, a Feb. 18 deadline is approaching to register to vote in the March 17 presidential primary in Florida, a critical swing state known for close elections.

Leonel Frage, 60, who hasn't been able to vote in over 15 years, walks away holding a paper restoring his right to vote during a special court hearing aimed at restoring the right to vote under Florida's Amendment 4 in a Miami-Dade County courtroom on November 8, 2019, in Miami, Florida.  (AFP via Getty Images)

“It is a confusing, Byzantine morass,” said Myrna Pérez, director of the Voting Rights and Elections Program at the Brennan Center for Justice, which sued the state over the issue.

Republican Gov. Ron DeSantis’s office and GOP Secretary of State Laurel Lee’s office didn’t respond to requests for comment. Republican state Rep. James Grant, who sponsored the law aimed at implementing the amendment, said, “We’re going to continue to do everything we can within our purview to get it right.”

The 2018 amendment, which was approved by nearly 65 percent of Florida voters, ended the state’s permanent disenfranchisement of felons. The measure restored voting rights to those who completed their prison terms as well as parole or probation, except people with murder or felony sexual-assault convictions.

To continue reading on The Wall Street Journal, click here.