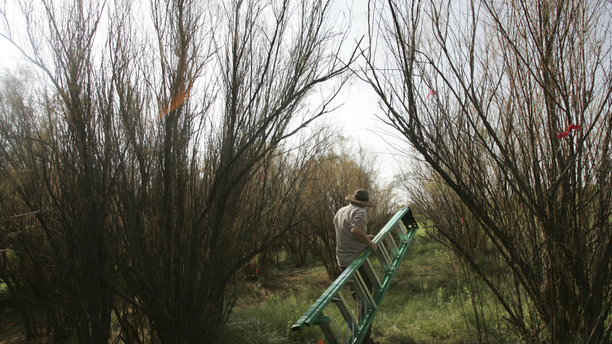 Weeds, feral cats, insects and other pests are invading the U.S. West, and state governors released a list of the worst offenders Thursday in hopes of helping people recognize and eradicate the invaders before they spread.

The Western Governors' Association cataloged the top 50 invasive species in their region, saying the pests have already caused billions of dollars in damage to agriculture and infrastructure.

"Western governors have said the spread of invasive species is one of the greatest risks to the Western environment," said Bill Whitacre, the association's policy adviser for public lands and agriculture.

Some of the species on the governors' list have been in the headlines before, including water-gulping salt cedar trees and quagga mussels. Others may be surprises, such as feral cats.

"They have huge impacts to native bird species," Whitacre said.

They're not pets on the loose, he said, but descendants in a long line of feral cats that have learned to live on their own.

Most states have their own lists of invasive species as well as workers tasked with getting rid of them, or at least controlling them, Whitacre said. But they tend to work only within their borders.

The West-wide invasive species list is a first, and the governors hope it will help state workers collaborate against the broader problem.

"A huge part of invasive species management is knowing what's there and what's not," Whitacre said.

"If there's early detection and rapid response, then there's eradication," he said.

At least two diseases made the list: white nose syndrome, which infects bats, and whirling disease, which attacks fish.

Most invasive species are an accidental consequence of international trade, said Leigh Greenwood, a manager for The Nature Conservancy and a member of Montana's state Invasive Species Council.

She cited two invaders that attack and kill elm and ash trees.

"When we look at the emerald ash borer coming in from China and Dutch elm disease coming from Europe, that's not a coincidence, because we used to get all of our goods from Europe and now we get them from China," she said.

Two important steps are using only local firewood, to avoid transporting pests that may have killed the tree, and making sure boats aren't carrying invasive mussels or weeds, she said.

Follow Dan Elliott at http://twitter.com/DanElliottAP. His work can be found at https://apnews.com/search/dan%20elliott .