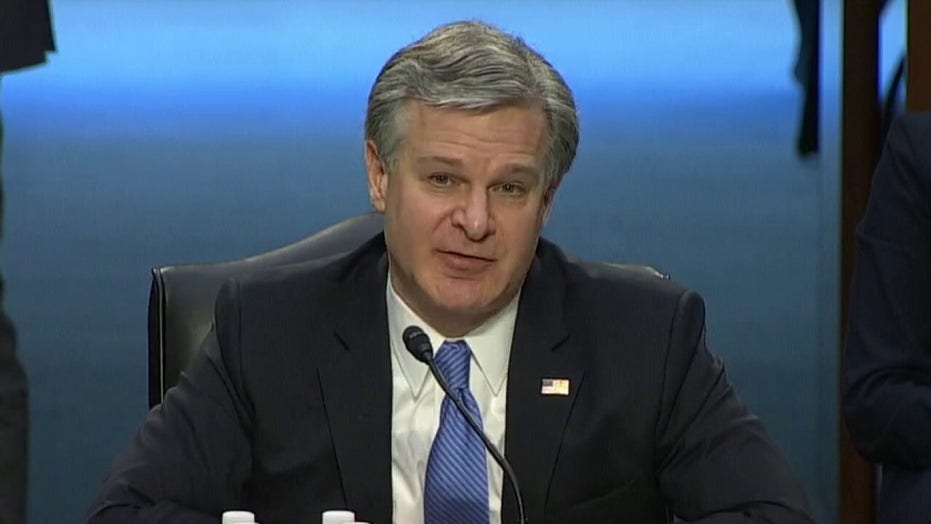 The FBI’s Norfolk report sent out Jan. 5, a day before the Capitol riot, included "raw reporting" on "calls for violence" but did not mention any potential breach of the building, Fox News has confirmed.

Fox News obtained a physical copy of the "situational information report," which is unclassified and was issued by the FBI’s Norfolk, Va., Division on Jan. 5.

U.S. Capitol Police received this information ahead of the riot. FBI Director Christopher Wray testified to joint Senate committees Tuesday that he was not made aware of the report until after the riot.

Although Wray was not personally aware of the memo at the time, he testified that the FBI sent the information out "within an hour" of receiving it on Jan. 5 in three ways: by email through FBI’s joint terrorism task force, discussed verbally at a command post with both Capitol Police and Metro Police present, and posted on an internet portal available to other law enforcement agencies.

Fox News is told that while there is specificity in the threat against the Capitol Thursday, the information leading to the present alerts is less concrete than what was in the Norfolk report. Capitol Police said in a statement Wednesday that it was increasing security measures after obtaining intelligence that shows a possible plot to breach the Capitol by an identified militia group on Thursday, March 4. The House canceled sessions Thursday, but the Senate is still convening.

The FBI's Norfolk report notes that it is an "information report, not finally evaluated intelligence. It is being shared informational purposes but has not been fully evaluated, integrated with other information, interpreted or analyzed. Receiving agencies are requested not to take action based on this raw reporting without prior coordination with the FBI."

The report says there are "calls for violence" in response to "unlawful lockdowns" to begin on Jan. 6 in Washington, D.C. An online thread discussed specific calls for violence, including, "Be ready to fight. Congress needs to hear glass breaking, doors being kicked in, and blood from their BLM and Pantifa slave soldiers being spilled. Get violent…stop calling this a march or rally, or a protest. Go there ready for war. We get our President or we die. NOTHING else will achieve this goals," the report stated.

"Pantifa" is a term used to mock Antifa members.

One posted commented, "if Antifa or BLM get violent, leave them dead in the street,’" according to the report.

"Another individual commented that they needed people on standby to provide supplies, including water and medical to the front lines," the report says. "The individual also discussed the need to evacuate noncombatants and wounded to medical care."

Included in the FBI report are maps demonstrating where insurrectionists may have intended to create a perimeter around the Capitol, House and Senate office buildings, two Library of Congress buildings and the Supreme Court. It also reveals the locations of Capitol access tunnels.

Lawmakers have pressed national security officials and those in charge of security at the Capitol on Jan. 6 about the so-called "Norfolk memo" in congressional hearings last week and earlier this week. It was first publicly reported by The Washington Post on Jan. 12. On Wednesday, lawmakers again asked the FBI to make the report available to Congress.