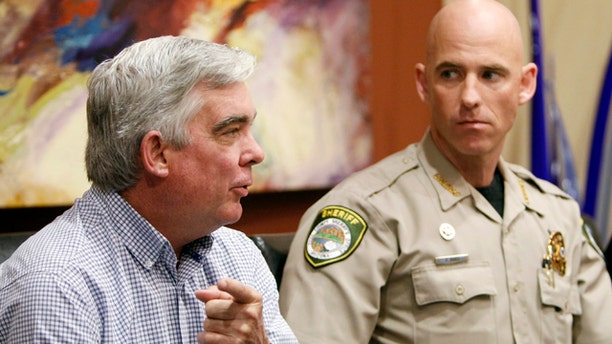 An Arizona sheriff says he has been flooded with calls and emails of support from local and federal agents who back his claims that the U.S. Border Patrol has effectively ordered them to stop apprehending illegal immigrants crossing the U.S.-Mexican border.

“Upper management has advised supervisors to have agents ‘turn back South’ (TBS) the illegal aliens (aka bodies) they detect attempting to unlawfully enter the country … at times you even hear supervisors order the agents over the radio to 'TBS' the aliens instead of catching them,” one San Diego border agent wrote in an email to Cochise County Sheriff Larry Dever.

“This only causes more problems as the aliens, as you know, don't just go back to Mexico and give up. They keep trying, sometimes without 10 minutes in-between attempts, to cross illegally,” continued the email, which was among a number of communications to Dever reviewed by FoxNews.com. “This makes the job for agents more dangerous. Not only are the aliens more defiant, they also begin to feel like they can get away with breaking our federal laws.”

The email is one of more than 100 messages Dever said he received from active and retired Border Patrol agents and law enforcement officers from across the country. Many wrote of what they said was their own experience and first-hand knowledge of Border Patrol’s efforts to reduce apprehension numbers by making fewer arrests.

FoxNews.com first reported this month that Dever said several Border Patrol officials, including at least one senior supervisor, told him they had been directed to keep the number of border apprehensions down by chasing illegal immigrants back toward Mexico. Homeland Security Secretary Janet Napolitano has recently cited a reduction in border apprehensions as evidence of an increasingly secure border.

Three days after FoxNews.com’s initial report, Border Patrol chief Michael Fisher sent a letter to Dever in which he denied the accusations and invited the sheriff on a ride-along with federal agents at border.

"That assertion is completely, 100 percent false," Fisher wrote in the letter. "That it comes from a fellow law enforcement official makes it especially offensive."

But accounts from law enforcement officials around the country continue to pour in supporting Dever and the conversations he says he had with Border Patrol officers, including at least one supervisor, about keeping arrest numbers down.

“This is nothing new, during my career with the border patrol, this was done regularly,” said another email to Dever reviewed by FoxNews.com. “By assigning agents to different tasks, locations, etc., the apprehensions can be increased or decreased dramatically,” wrote Dan McCaskill Jr., a retired Border Patrol agent who worked in the Anti-Smuggling Unit.

McCaskill went on to describe how, he said, apprehension numbers were regularly manipulated to achieve various budget, equipment or manpower goals.

In response to request for comment on the new allegations, Homeland Security offered the same statement from Jeffery Self, commander of the U.S. Customs and Border Protection Joint Field Command, that was provided to FoxNews.com earlier this month:

“As the commander for border enforcement operations in Arizona, I can confirm that the claim that Border Patrol supervisors have been instructed to underreport or manipulate our statistics is unequivocally false. I took an oath that I take very seriously and I find it insulting that anyone, especially a fellow law enforcement officer, would imply that we would put the protection of the American public and security of our nation’s borders in danger just for a numbers game. Our mission does not waiver based on political climate and it never will. To suggest that we are ambiguous in enforcing our laws belittles the work of more than 6,000 CBP employees in Arizona who dedicate their lives to protect our borders every day.”

Local 2544, the Tucson branch of the National Border Patrol Council union, has also come out in support of Dever, and posted this message on their website after the FoxNews.com report.

“Sheriff Dever is right. We have seen so many slick shenanigans pulled in regards to 'got-aways' and entry numbers that at times it seems David Copperfield is running the Border Patrol. Creating the illusion that all is well and you can start having family picnics in the areas where we work has been going on far too long. Has there been improvement in some areas? Absolutely. Is the border anywhere near 'under control'? Absolutely not. Do some in management play games with numbers and cater to the wishes of politicians like Janet Napolitano and David Aguilar? Resoundingly, yes. Time for the foolish political games to stop.”

The union posted another response on their website following Fox News’ publication of Fisher’s April 6 letter to Dever:

“Just remember, for years now we have been told from the highest ranking managers in our agency that 'every apprehension is a FAILURE' (Johnny Williams - former INS Western Region Director), and that we 'are NOT immigration officers' (current CBP Deputy Commissioner David Aguilar to Border Patrol agents when he was the Chief of the Border Patrol)…. We have been told that - Apprehensions = failure, we are not 'immigration' officers, we should not 'lower' ourselves to the status of an immigration officer, and our primary job is not apprehending illegal aliens. Couple all this with Secretary Napolitano's recent public announcement about what she expects our apprehension numbers to be this fiscal year, and it's not hard to figure this thing out.”

A second Arizona sheriff, Paul Babeu of Pinal County, also testified at a Senate Homeland Security Committee last week in support of Dever’s charges. Dever was slated to appear at the hearing, but said he could no longer attend when the date of his appearance was changed.

Asked specifically about Dever’s assertion that agents were told to turn back illegals to reduce apprehensions, Babeu told the committee he’d specifically asked his top lieutenant, Matt Thomas, about the claims.

"He said, 'Sheriff, I have heard that myself directly from border agents in the Tucson sector,'" Babeu testitified.

Babeu told FoxNews.com he’s been told by Border Patrol officials that for every person apprehended at the border, an average of 2.7 succeed in crossing into the U.S. With those numbers, he said he was concerned paramilitary or terror cells equipped with more sophisticated support and training could easily get through.

T.J. Bonner, retired president of the National Border Patrol Council, said in an interview with FoxNews.com that he’s familiar with “TBS-ing” and shares Babeu’s concerns about criminals and terrorists crossing the border.

“TBS has been going on for a number of years. You’ll never find orders in writing, and some agents have even been disciplined for TBS-ing people. That’s a practice that dates back to quite some time, to try and discourage is part of their 'strategy of deterrence.'"

Bonner said Border Patrol agents are receiving “TBS” orders from someone higher up, but he isn’t sure who.

“Agents don’t just do this on their own. The orders must come from on high. They don’t just wake up one day and say I’m going to risk my job, my livelihood,” said Bonner, who retired last year after 32 years with Border Patrol. “I’m not sure if it’s Napolitano or folks in Customs and Border Protection, but somebody wants to silence critics in Arizona to claim success in Arizona.”

As for Dever, he says he’s just hoping that some good will come out of this.

“Frankly, I don't want to create a firestorm," he said. "I only want this problem solved.”