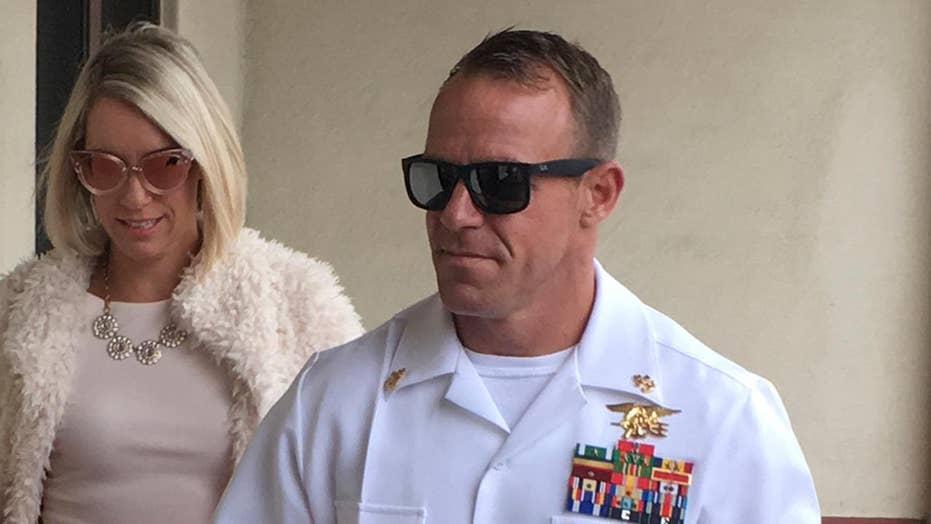 Retired Navy SEAL Eddie Gallagher is suing Navy Secretary Kenneth Braithwaite and a New York Times reporter, claiming Navy officials leaked personal documents to the newspaper in an attempt to smear him and pressure him into taking a plea deal over war-crimes charges.

Gallagher, a 15-year SEAL, was found not guilty last year of killing a teen Islamic State fighter in 2017, shooting at unarmed Iraqi civilians and other criminal charges. However, he was convicted of posing with a corpse for photos in a highly charged case that had been marred by a series of prosecutorial missteps.

The lawsuit, filed last week in U.S. District Court for the Southern District of California hours after Braithwaite was sworn in as secretary, claimed the Navy fed Times reporter David Philipps with a "golden egg" consisting of protected documents so he could file negative reports on Gallagher "with reckless disregard for the truth."

"Our family filed multiple IG investigations to allow the Navy to conduct their own internal audit - but despite well-documented corruption, a spying operation that removed a prosecutor, media manipulation and other gross ethical violations, the Navy has refused to hold themselves accountable," read a statement to Fox News from The Pipe Hitter Foundation, a nonprofit started by Gallagher and his wife providing legal support to veterans, police officers and their families.

Philipps allegedly received 500 pages of confidential documents from the Navy's criminal investigation, the branch's prosecution team, which he referred to as "the mother lode" comprising witness-interview summaries and text messages, the lawsuit claimed.

The lawsuit described Philipps, a 2014 Pulitzer prize winner, as a "marginal journalist" who trafficked in "negative and bigoted stereotypes" and who falsely painted combat veterans as "damaged and violent."

One such inaccuracy cited in the complaint was Philipps' reporting that SEALs were "indiscriminately spraying neighborhoods with rockets and machine-gun fire." The suit contended Gallagher was never accused of such action and that Philipps "wholly invented" it.

The lawsuit accused Philipps of fabricating details, making false or misleading statements and inflating the number of witnesses interviewed. As a result of the negative media attention, Gallagher has suffered mental and emotional anguish and has been subjected to ridicule and humiliation, the lawsuit stated.

His family has also been on the receiving end of death threats and harassment, it continued.

In a statement to Fox News, the Times defended Philipps' reporting.

"Mr. Gallagher's complaint is long on conspiracy theory and very short on facts about what actually happened in Iraq," said Danielle Rhoades-Ha, the vice president of communications for the newspaper. "Dave Philipps did what any good journalist should: he accurately reported on a criminal trial, including testimony that implicated Mr. Gallagher in the death of a man. Nowhere in a 40-page complaint does Mr. Gallagher deny his role in the killing."

The Navy did not return requests for comment from Fox News.

Gallagher faced multiple criminal charges during his trial, the most serious being the alleged stabbing death of the ISIS fighter.

The biggest surprise came when Special Operator 1st Class Corey Scott admitted he asphyxiated the ISIS fighter in 2017. Scott said he saw Gallagher stab the fighter but that he himself put his thumb over a breathing tube inserted into the teen's mouth.

Other missteps included the lead prosecutor being removed from the case for allegedly trying to spy on defense attorneys and a journalist. Navy Cmdr. Christopher Czaplak was ousted after he was accused of attaching tracking software to emails sent to attorneys and a Navy Times reporter in an effort to find the source of leaks to the media.

The lawsuit claimed Czaplak was a prosecutor with "marginal legal skills" who put out false information to influence the proceedings "in an effort to win."

Upon his conviction for posing for a photo with a corpse, Gallagher was demoted from chief petty officer to a 1st class petty officer. President Trump took an active interest in the case and restored his rank in November.

He also opposed Navy efforts to strip Gallagher of his Trident pin. Tensions over how the issue was handled boiled over and resulted in Navy Secretary Richard Spencer being fired and Gallagher being allowed to keep the coveted SEAL uniform device.

In addition, Trump rescinded Navy Achievement medals awarded to the prosecutors days after the case. The lawsuit doesn't seek any specific monetary damages.

"By filing this civil lawsuit we will continue to seek justice and hold the Navy and David Philipps accountable for their shocking abuse of power so no other service member is subjected to this type of corruption ever again," The Pipe Hitter Foundation continued.