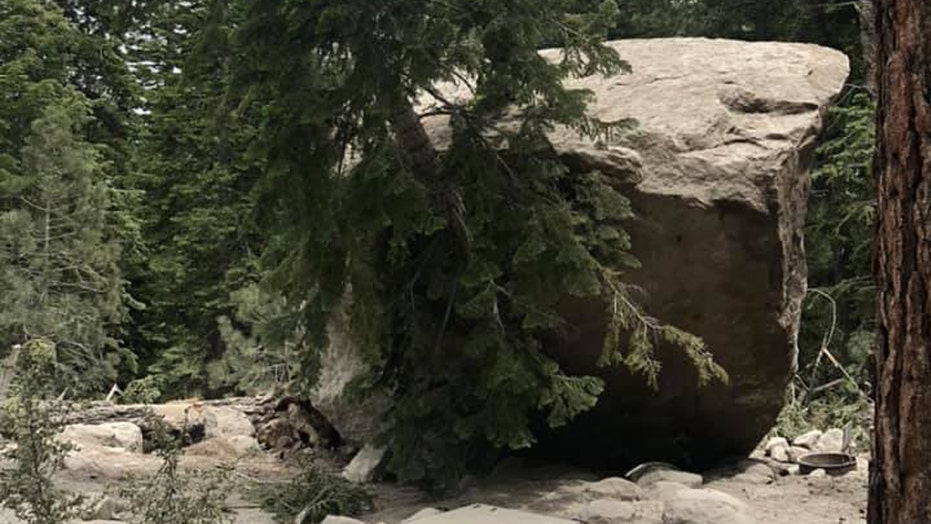 A moderately strong earthquake that rattled central California on Wednesday triggered a rock slide that sent boulders and debris crashing into a camping area.

The United States Geological Survey (USGS) said the quake had a preliminary magnitude of 6.0 before downgrading it to 5.8. The temblor jolted the area around 10:40 a.m. and had an epicenter of about 10 miles south-southeast of Lone Pine, Calif.

The Inyo County Sheriff's Office said on Facebook a rock slide was triggered by the quake in the Whitney Portal area about 45 miles from the epicenter.

A magnitude 5.8 earthquake on Wednesday in California triggered a rockslide at Whitney Portal in California. (Inyo County Sheriff's Office)

The Whitney Portal is the gateway to Mt. Whitney, the highest point in the contiguous U.S. and the trailhead for the Mt. Whitney Trail, according to KPIX-TV.

A magnitude 5.8 earthquake on Wednesday in California triggered a rockslide at Whitney Portal in California. (Inyo County Sheriff's Office)

Photos released by the sheriff's office show large boulders that crashed into the area.

A large boulder rests against a tree after a magnitude 5.8 earthquake triggered a rockslide at Whitney Portal in California. (Inyo County Sheriff's Office)

One roadway was closed due to debris and rocks in the road.

Campgrounds were being evacuated and no injuries were reported, the sheriff's office said.

Damage after a magnitude 5.8 earthquake on Wednesday in California triggered a rockslide at Whitney Portal in California. (Inyo County Sheriff's Office)

Clouds of dust could be seen hanging in the air close to the parking lot and camping ground in a video posted to Twitter by John Chrissinger.

Chrissinger told Storyful he was standing in the picnic area at Whitney Portal when he heard a "low rumble" and then "a few pretty hard shakes to the right and left" that lasted about 10 seconds.

“There was a thunderous crash and you could see part of the mountain coming down, lucky that we were on the other side of the portal road, I did not have time to video the landslide it all happened so fast, was over in 30 seconds," he told Storyful. "Funny it was just dead silence and all the dirt rising up after the slide. Felt really eerie."

Another photo he took showed a large boulder that "took out several campsites and trees."

Other videos also showed dust clouds on area mountains after the quake.

The shocks were felt by local residents in the California cities of Fresno and Acampo, and in Las Vegas, among other areas near the epicenter.

No injuries were reported, though there was some minor damage at the epicenter.

The Lone Pine Market was left with broken bottles of alcohol and glass jars of food that littered the floors after the quake shook the area.

Dust on vehicles after a magnitude 5.8 earthquake triggered a rockslide at Whitney Portal in California on Wednesday. (Inyo County Sheriff's Office)

Ramon Sanchez told FOX26 that at one point, tiles started falling from the ceiling. The area saw a magnitude 4.8 earthquake on Monday.

"We're used to the sonic booms from the naval base located right behind us. And we just thought that's what it was when the initial earthquake started," he told the television station.

After the initial quake, there were also dozens of aftershocks reported, ranging from 4.6 to 2.5.