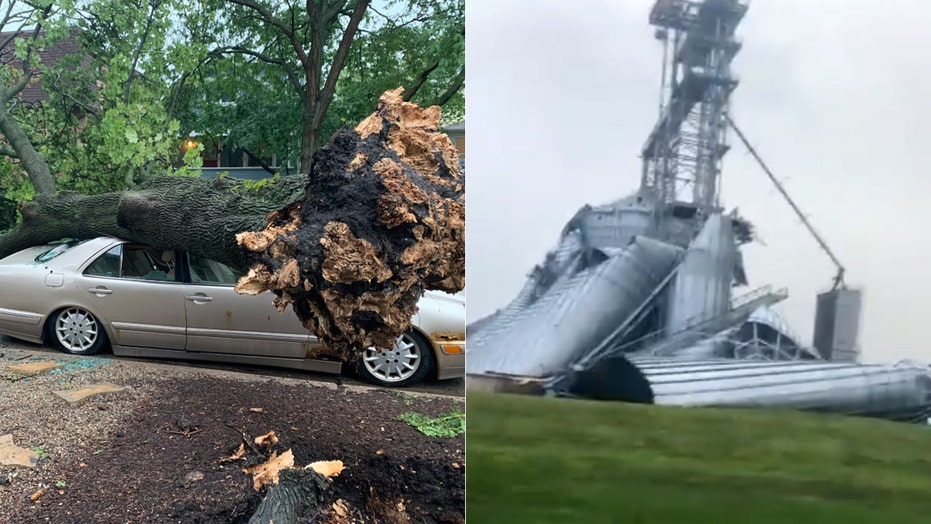 Bystanders record the damage from dangerous winds in Chicago and Iowa.

The wicked winds of a rare derecho roared hundreds of miles across the Midwest on Monday, flipping vehicles, killing at least one woman, and leaving over a million without power.

The National Weather Service's (NWS) Storm Prediction Center (SPC) said Tuesday morning that the "intense derecho" traveled from southeast South Dakota all the way to Ohio, a path of 770 miles in 14 hours.

Along the way, the inland storm produced widespread damaging wind gusts, including numerous gusts over 75 mph -- hurricane force -- and several over 90 mph in central Iowa.

“There’s just destruction throughout the entire community,” Cedar Rapids City Manager Jeff Pomeranz told The Gazette. “This is a very serious event and we’re taking every action to make sure that the city is restored to the best of our ability.”

According to the SPC, there were several hundred reports of wind damage across the area and two reported tornadoes.

Estimated winds between 90 t0 100 mph were reported in parts of Iowa as the storm system moved through.

In the town of Linn, multiple campers were reported to have blown over after estimated gusts of over 100 mph. Motorists captured overturned trucks throughout the state.

A grain elevator collapsed in the town of Luther as the derecho blasted east.

According to KCCI-TV, Boone County, where Luther is located, and cities including Ankeny, Johnston, Marshalltown and Perry were one of several areas under a “travel not advised” alert.

A grain elevator in Luther, Iowa, collapsed from the intense winds of a derecho on Monday, Aug. 10, 2020. (@MONASTiCNiCK via Storyful)

“Many communities have significant tree/structural damage. Travel is impassable in some areas. Please stay home and shelter in place so emergency workers can work to restore power,” the NWS said.

A tree fell across vehicles at a home in West Des Moines, Iowa, after a severe thunderstorm moved across Iowa on Monday, Aug. 10, 2020, downing trees, power lines and damaging buildings. (AP Photo/David Pitt)

Tens of thousands of people in the metro area were without power after the devasting winds blasted through.

“We have damage to homes and businesses, including siding and roofs damaged,” he said. “Trees and power lines are down throughout the entire city.”

Cedar Rapids on Monday night issued a 10 p.m. curfew that will continue until further notice as crews worked to clean up fallen debris.

Downed trees and a utility pole in front of the home of Tim and Patricia Terres in Walcott, Iowa, after high winds and heavy rain passed through the area Monday, Aug. 10, 2020, in Davenport, Iowa. (Kevin E. Schmidt/Quad City Times via AP)

The Iowa Department of Transportation said multiple roads across the state were impacted by downed trees, powerlines or overturned trucks.

"Please stay put if you don't need to travel," the agency tweeted.

The derecho can be seen approaching Woodridge, Ill., on Aug. 10, 2020. (Woodridge Police Department)

After slamming Iowa, the storm system moved through Chicago and into Indiana and Michigan, causing more damage.

In northern Illinois, the National Weather Service reported a wind gust of 92 mph near Dixon, about 100 miles west of Chicago, and the storm left downed trees and power lines that blocked roadways in Chicago and its suburbs.

Part of a tree that had split at the trunk lies on a road in Oak Park, Ill., while also appearing not to have landed on a car parked on the road, after a severe storm moved through the Chicago area Monday, Aug. 10, 2020. (AP Photo/Dave Zelio)

Footage posted to Twitter showed part of a roof flying off a building at Lake Shore Drive in Chicago.

After leaving Chicago, the most potent part of the storm system moved over north-central Indiana by late afternoon.

In Fort Wayne, Indiana, a woman died at a hospital after firefighters pulled her from debris inside her mobile home after high winds rolled it onto its side Monday night, according to Adam O’Connor, deputy chief of the Fort Wayne Fire Department.

Firefighters found her under debris inside her toppled trailer and discovered that she was clutching a 5-year-old boy believed to be her grandson, he said.

A photo from Tuesday morning showed the crumpled debris of the trailer.

“They had to stabilize the trailer, crawl inside the trailer, find the two victims and bring them out,” O’Connor told the Associated Press. “It’s awful. I was thinking about that all last night."

He said it took firefighters 14 minutes to remove the woman from the debris and lift her through the door of the trailer, located on Fort Wayne’s northeast side where there was widespread storm damage.

According to power outage tracking site poweroutage.us, over 1.2 million people were initially impacted by the storm system.

That number had dropped to just over 1 million by Tuesday morning.

The states with the greatest number of outages were Illinois, Iowa and Indiana, where many residents reported downed trees.

MidAmerican Energy said nearly 101,000 customers in the Des Moines area were without power after the storm moved through the area

The high winds across Nebraska downed trees and caused a trampoline to fly into one Omaha resident’s backyard.

Omaha Public Power Districts said Tuesday morning that outages are down to 4,500 from a peak of 57,000.

The derecho can be seen approaching Woodridge, Ill., on Aug. 10, 2020. (Woodridge Police Department)

In order for a cluster of thunderstorms to be defined as a derecho, a wind damage swath must extend for more than 240 miles and include wind gusts of at least 58 mph along most of its length.

“This is our version of a hurricane,” Northern Illinois University meteorology professor Victor Gensini told the Associated Press.

While a derecho doesn't have an eye like a hurricane and its winds come across in a line, the damage it does is likely to spread out over a large area like a hurricane, as opposed to localized impacts from a tornado.

He said Monday's derecho will go down as one of the strongest in recent history and be one of the nation's worst weather events of 2020.

Other derechos this year impacted areas from Utah to South Dakota, the Mid-Atlantic and the Nashville area.

The storms on Monday can be compared to the devastating Super Derecho of 2009, which was one of the strongest on record and traveled more than 1,000 miles in 24 hours, causing $500 million in damage, widespread power outages, and killing a handful of people.