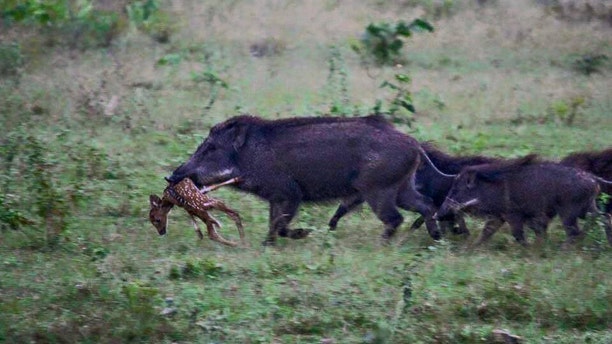 Deer hunters are facing competition from a source that is mean, relentless and out of control.

The explosion of feral hogs across the U.S. is threatening the deer population -- spreading disease, dominating the food chain and even, on occasion, killing and eating fawns. In Louisiana, where there are an estimated 700,000 wild hogs, hunters and wildlife officials say they are taking a toll on the whitetail deer herd.

"They are in the marshes and beaches of Louisiana all the way up into the hills and piney woods and swamps," Jim LaCour, state wildlife veterinarian for the Louisiana Department of Wildlife and Fisheries, told FoxNews.com. "They’re in every habitat in the state."

"If you start to see hogs in your hunting area, you are absolutely not going to see deer."

LaCour described the feral pigs, which can weigh up to 500 pounds, as "opportunistic" eaters -- omnivores that feast on anything crossing their path, including deer fawn, other piglets and dead animals.

LaCour said hogs carry many diseases, such as leptospirosis, which can infect or kill other animals, like deer, as well as humans.

"Hogs are the sport utility vehicle for disease and parasites -- they move them across the landscape," he said. "That bacteria [leptospirosis] can cause abortion in the deer – and it can kill adult deer or people."

Their presence is also detrimental to the land, forcing wildlife officials to carry out aerial gunning in certain areas "because they tear up the marsh and that leads to coastal erosion."

Hogs were first introduced to North America by Spanish settlers. The breed most commonly seen in Texas is a mixture of those hogs and Russian boars brought over more recently for sport hunting, according to the Texas Parks and Wildlife Department.

Some speculate the population boom is due to relatively recent cross-breeding in the wild. Others, like LaCour, say the popularity of hog hunting in the 1980's and early '90's led humans to move the feral pigs from confined, geographically isolated areas into places they had never been before.

Wild hogs can reproduce by the time they are 6 months old. Feral sows can have two litters per year averaging six piglets per litter, according to wildlife experts. Statisticians have determined that 75 percent of the population must be harvested to maintain a static population -- prompting Louisiana and other states to adopt liberal hunting policies when it comes to killing the hogs. Texas has the highest rate of feral hogs to date, according to environmentalists.

"If you start to see hogs in your hunting area, you are absolutely not going to see deer," said Lanclos, a 33-year-old bowhunter from Sulthur, La.

"Deer are extremely smart and elusive," Lanclos told FoxNews.com. "They just don’t like to occupy the same area as hogs."

Lanclos, the owner of retailer Louisiana Bowhunter, said he recently received a photo showing a herd of hogs -- or sounder -- running off with a whitetail fawn. The image, believed to have been taken in Louisiana, has since gone viral on social media.

"We’ve got other photos of feral hogs carrying fawns," noted LaCour. "If the hogs are coming through a field and they happen to come across it, they’re going to eat it."