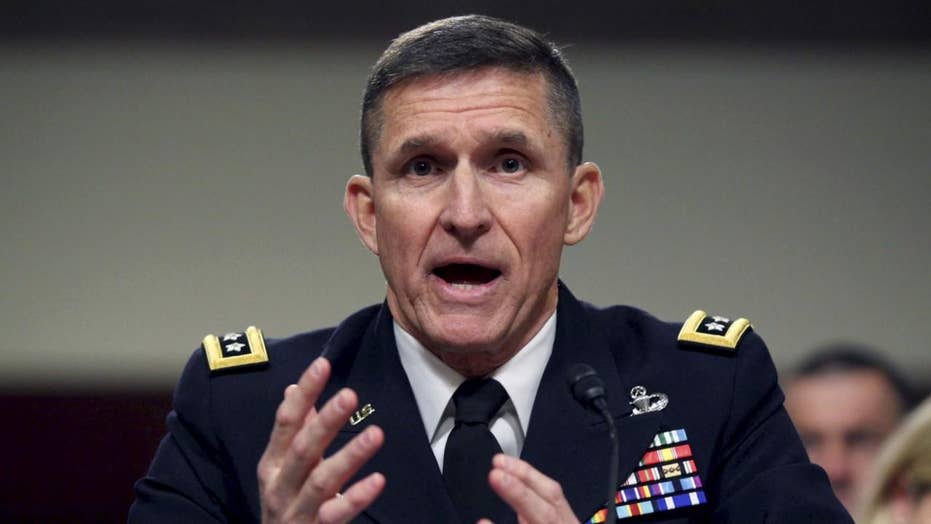 Former National Security adviser Lt. Gen. Michael Flynn calls for ‘accountability’ for those who investigated him, arguing bureaucracy in Washington has gotten ‘out of control.’ He also provides insight into election legal battles.

A New York man who left a threatening voicemail for the D.C. federal judge presiding over the case of Michael Flynn, a former national security adviser during the Trump administration, was sentenced to 18 months in prison on Monday – after the recording was played aloud in court.

"We are professionals. We are trained military people. We will be on rooftops. You will not be safe. A hot piece of lead will cut through your skull," 53-year-old Frank Caporusso is heard saying in the voicemail left on the line for U.S. District Judge Emmet G. Sullivan’s chambers on May 14, 2020.

The voicemail, played out in the Washington, D.C., courtroom Monday at Sullivan’s request, continued, "You bastard. You will be killed, and I don’t give a f--- who you are. Back out of this bulls--- before it’s too late, or we'll start cutting down your staff. This is not a threat. This is a promise."

U.S. District Judge Trevor McFadden, who was appointed by former President Donald Trump and is Sullivan’s colleague, sentenced Caporusso to 18 months, saying the voicemail "was intended to subvert the criminal justice system by intimidating [Sullivan] from a high-profile case," Politico reported.

"Judicial robes aren’t bulletproof," McFadden said, before then describing how the voicemail not only threatened Sullivan, but also younger staffers who cannot afford security systems at their apartments and aren’t guarded by federal marshals. "Your threat was despicable and it was calculated to instill a maximum amount of fear."

"I was not thinking well or doing well at that time," Caporusso, wearing an orange jumpsuit from the Central Virginia Regional Jail, said Monday. "I could not be more sorry or remorseful for threatening Judge Sullivan and his staff and family, and ashamed that I have done such a thing."

Caporusso said he had become addicted to painkillers and was abusing alcohol after a January 2020 surgery for a traumatic back injury and admitted to be being intoxicated when he made the call. He also apologized to his wife of 31 years and his developmentally disabled brother, whom he cared for.

The sentencing hearing Monday came over a year after a June 2020 shooting attack at the New Jersey home of federal Judge Esther Salas left her 20-year-old son dead and her husband critically wounded, Assistant U.S. Attorney Rachel Fletcher noted. Data from the U.S. Marshals Service shows that threats against federal judges have quadrupled over the past six years, the Washington Post reported.

At the time, the Department of Justice had just issued a filing to drop the false-statement case special counsel Robert Mueller’s office lodged against Flynn in 2017. But Sullivan said he wouldn’t immediately dismiss the case and wanted another judge to submit additional arguments on the matter.

Flynn had already pleaded guilty. Sullivan held another hearing in September to consider the motion to dismiss the case, but while the decision was still pending Trump pardoned Flynn two weeks after the November 2020 election. Sullivan then ultimately dropped the case.

Caporusso pleaded guilty in April to one count of influencing, impeding or retaliating against a federal official. He has already spent nearly 11 months in pre-trial detention since his arrest last August, and federal prison policies could have him released in the next four to five months, Politico reported.