A panel of law enforcement experts break down the Daunte Wright case and fallout on 'Fox &amp; Friends.'

The fatal police shooting of Daunte Wright in Minnesota has sparked another wave of protests in cities across America, with some resulting in dozens of arrests and heated clashes with officers, while others appeared to remain peaceful.

Here are how cities are reacting to Wright’s death:

Minnesota authorities arrested about 40 people after protesters and police clashed for a second night in Brooklyn Center, officials said during a press conference early Tuesday.

A demonstrator is arrested by police for violating curfew and an order to disperse during a protest against the police shooting of Daunte Wright, late Monday in Brooklyn Center, Minn. (AP)

Hundreds of protesters had gathered outside the Brooklyn Center Police Department on Monday in defiance of the city's curfew and demanded justice for Wright, chanting his name and shouting obscenities at police.

Drivers react as a line of police advances into a gas station in an effort to push back demonstrators gathered for a protest against the police shooting of Daunte Wright, late Monday, in Brooklyn Center, Minn. (AP)

Authorities fired tear gas and flash-bang grenades into the crowd after warning them that they were in violation of the curfew. Protesters retaliated by throwing smoke canisters back toward law enforcement, while others launched fireworks at the police lines, according to reports.

"Move back!" police told the crowd. "Hands up! Don't shoot!" the crowd chanted back.

Protesters confront police over the shooting death of Daunte Wright at a rally at the Brooklyn Center Police Department on Monday. (AP/Star Tribune)

In nearby Minneapolis, 13 arrests were made, including for burglaries and curfew violations, police said.

Portland police said a demonstration protesting Wright’s death turned into a riot Monday night, with some in the crowd throwing rocks and other projectiles at officers.

The evening began as a vigil for Wright. Police said at least 200 people gathered around 8:30 p.m. at the Penumbra Kelly Building, which houses an office for the Multnomah County Sheriff and Portland police.

Portland police line up outside of the Penumbra Kelly Building in downtown Portland, Ore., on Monday. Police say a demonstration protesting the police killing of 20-year-old Daunte Wright in Minnesota turned into a riot, with some in the crowd throwing rocks and other projectiles at officers. (Portland Police Bureau via AP)

But investigators say the crowd became more aggressive as the night progressed and began throwing glass bottles, frozen water bottles, rocks and fireworks toward officers and the building. Some in the crowd also attempted to light a dumpster on fire.

Police said they issued verbal warnings to the crowd, but around 10:30 p.m. they declared the gathering a riot before moving in on the protesters, knocking them to the ground and macing them, news outlets reported. 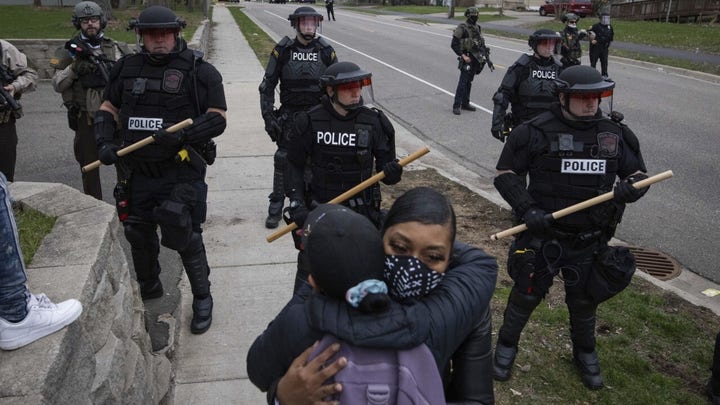 After officers pushed the crowd back, police said they "purposely disengaged" from the crowd "to allow people to begin acting lawfully and peacefully." It’s unclear whether any arrests were made.

The New York Police Department advised people to avoid the Manhattan-bound portion of the Manhattan Bridge "due to ongoing police presence and traffic delays."

Videos posted on Twitter by a Courier-Journal reporter showed a number of protesters blocking an intersection while chanting Wright’s name.

The group then moved down a street before being trailed by several police cruisers. Bystanders could be heard yelling, "You can’t stop the revolution!" while officers were moving past them.

The protesters then stood in the center of another intersection while at least 10 police cruisers watched on, with their lights flashing. The police presence eventually left and the protesters began sitting down in the intersection.

Following more chanting, the protesters left, according to Courier-Journal reporter Hayes Gardner. Police returned to clear out tables, chairs and benches that had been placed in the street.

The Seattle Police Department tweeted Monday night that it was monitoring a group that "vandalized" multiple businesses.

"Police have given multiple warnings to not block traffic and keep demonstration peaceful," it said.

Some of the vandalism last night during demonstrations in Seattle. (Seattle Police Department)

The department, in a tweet, shared images of a shattered store window and the phrases "BLM" and "No Peace" spray-painted on other buildings.

As of Tuesday morning, there were no immediate reports of arrests.

Hundreds of protesters were seen marching in downtown Washington, D.C., on Monday night, according to Fox 5 DC.

"We don’t need no cops!" the crowd could be heard chanting.