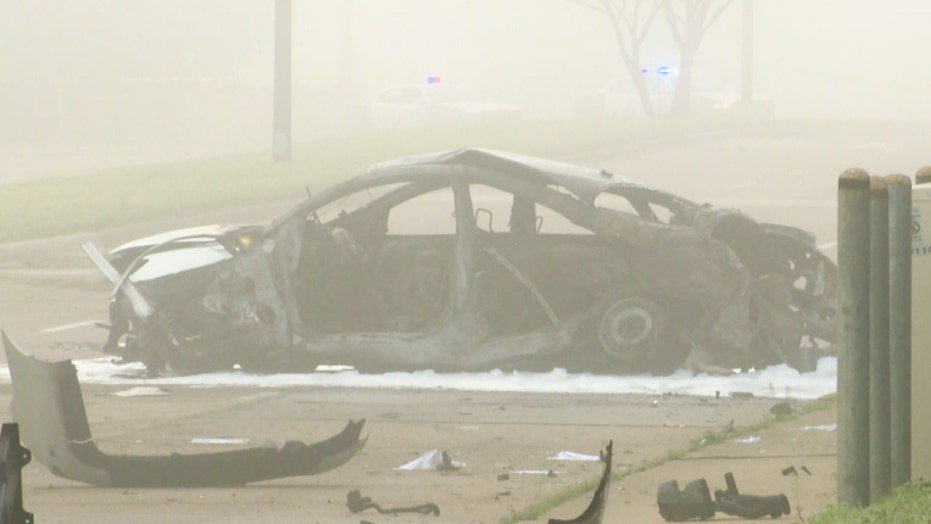 A 45-year-old driver was killed in Dallas early Sunday in a crash that involved two street racers, according to police.

The deadly crash unfolded around 5 a.m., Fox 4 reported. The victim, Kendrick Lyons, was struck by one of two racing Camaros, according to the station.

Lyons’ mother said he was driving to donate plasma and had celebrated his birthday with the family the night before.

Police say Lyons' car caught fire and burned to hits frame after it was hit by a street racer early Sunday.  (KDFW)

Lyons was ejected from his vehicle and killed. The impact of the crash had sent Lyons’ car into rotation before it caught fire, police said.

The driver who hit Lyons’ car was rushed to a nearby hospital with “serious internal injuries.” Neither his name nor his condition has been released.

The other driver, 27-year-old Alejandro Valdez, hit a curb and mailbox before stopping his car.

Valdez was unhurt. He remained at the scene and turned himself in to police, Fox 4 reported. He was being held at Dallas County Jail.

Police said Valdez and the driver who struck Lyons will be charged with racing causing death.