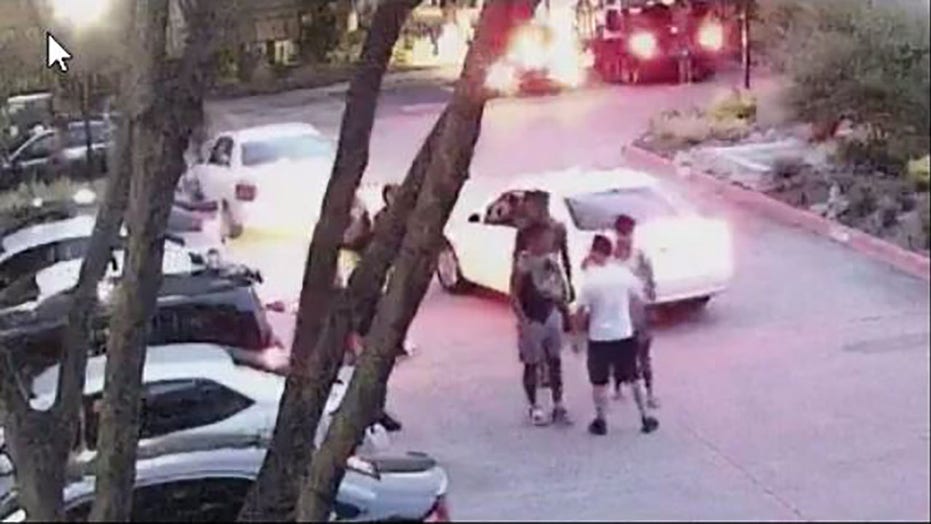 An off-duty Dallas police officer was attacked from behind Thursday night after telling a group to leave a closed pool area at an apartment complex, authorities said.

The assault unfolded around 9 p.m. at the Allure apartments complex in North Dallas, police said Friday in a news release.

The officer, who was in plainclothes, identified himself as a Dallas police officer and tried to disperse the crowd, police said. As he walked away, police said multiple people attacked him from behind and he fell to the ground.

The officer lost consciousness during the attack, police told WFAA-TV. When he woke up, he called 911 and told responding officers that a group of three or four men had struck him in the back and kicked him several times, police said.

The off-duty officer, seen wearing shorts and a t-shirt, identified himself as a Dallas police officer before telling the group to leave. (Dallas Police Department)

He was taken to a hospital for treatment and is expected to be OK, FOX4 Dallas-Fort Worth reported.

No suspects have been arrested.

The officer was working as a courtesy patrol officer at the complex when he responded to a call about a disturbance at the closed pool area, Dallas Police Association President Michael Mata told WFAA.

Mata said an attack on a police officer only diminishes the community's relationship with police, and fuels "this idea that it is OK in today’s world to disobey authority."

"It’s very unfortunate that an officer attempting to do his job was attacked in this manner for nothing else but being a police officer," Mata said.

Dallas police have asked anyone with information on the attack to contact the department.