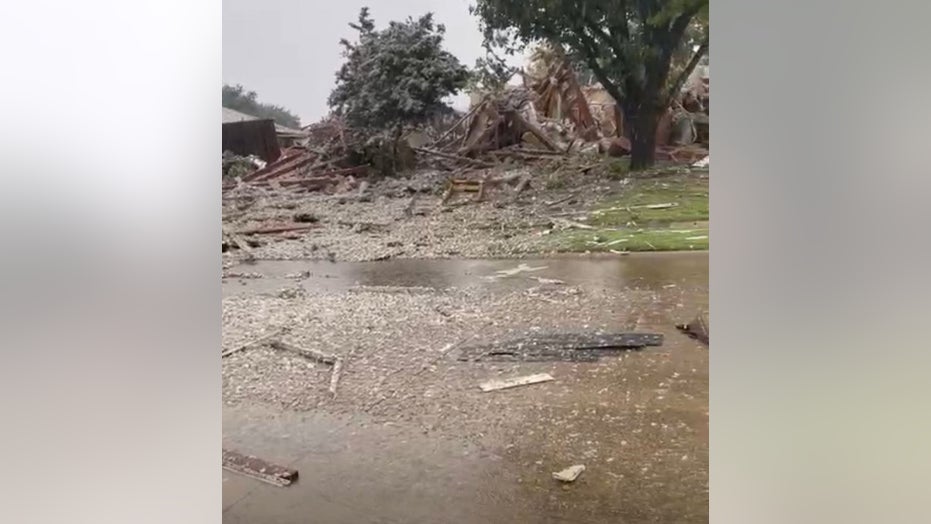 Plano Fire-Rescue responded to the 4400 block of Cleveland Drive following the blast around 4:45 p.m., a department spokeswoman told Fox News. Three adults and three children were taken to hospitals but the extent of their injuries was not disclosed, Fox-owned station KDFW-TV reported.

One resident was inside the home that exploded and the other five patients were residents of a home next door, fire officials said. The blast was felt a mile away at the Haggard Library, they said.

Images posted online showed debris scattered all over a residential neighborhood and what appeared to be a home completely destroyed.

An aerial view of a destroyed Plano, Texas home where an explosion occurred Monday.  (Courtesy of KDFW-TV)

Investigators have not determined a cause for the explosion, officials said.

"All of the sudden I heard what I thought was my sliding glass door breaking," neighbor Caroline Klobas told the news outlet. "And I just noticed two picture frames on the wall fall down and the sound and that didn’t match up. When my husband pulled into our garage, the roof had caved in."

Debris is littered all over a residential street in the Dallas suburb of Plano after a reported explosion Monday.  (Courtesy of Abigail Bostrom)

The home that exploded was leveled, Steve Stoler, a spokesman for the city, told Fox News. A handful of homes near the residence where the explosion occurred were also damaged, he said.

Fox News has reached out to the Plano police department.

Check back for more on this developing story.