By , ANGIE WANG and JOHN SEEWER 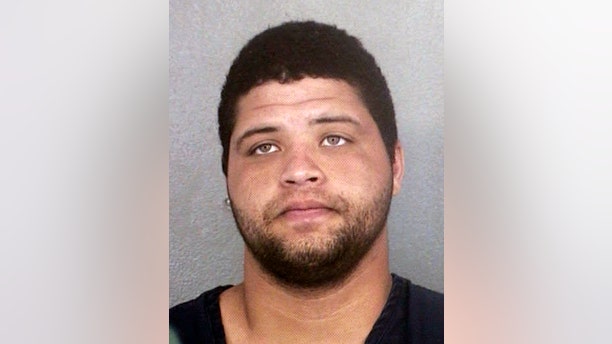 In a story Sept. 7 about shootings in Cincinnati, The Associated Press misspelled the name of one of the victims based on previous information released by a coroner. It is Prudhvi Kandepi, not Pruthvi.

The shooter who killed three people in a Cincinnati office high-rise had made filed a recent lawsuit that a judge in June said "borders on delusional."

By ANGIE WANG and JOHN SEEWER

CINCINNATI (AP) — The shooter who killed three people in a Cincinnati office high-rise once acted disoriented after being fired four years ago in South Carolina, and he filed a recent lawsuit that a judge in June said "borders on delusional."

Authorities on Friday said they have not figured out why 29-year-old Omar Enrique Santa Perez opened fire inside the lobby of a building where he never worked or had any known connection. The city's police chief said the gunman's mental health history is one of several areas they are investigating.

Police Chief Eliot Isaac said Santa Perez bought the 9 mm handgun legally about a month ago in Cincinnati before he randomly shot at workers Thursday morning in the building that houses the headquarters of Fifth Third Bancorp.

Security footage from inside the lobby showed him firing while carrying a briefcase containing hundreds of rounds of ammunition over his shoulder. Police later found his gun had jammed during the four-minute rampage, Isaac said.

The video also showed Santa Perez walking quickly past a security turnstile just as he was shot by police officers who fired through a plate glass window.

Santa Perez had been in Cincinnati since at least 2015, police said. Before that he lived in South Carolina and Florida.

He filed a lawsuit in 2017 that claimed CNBC Universal Media LLC and TD Ameritrade Holding Corp. hacked into his computer, spied on him and published details about him.

Santa Perez said the companies tapped into audio speakers and digital cameras to invade in his private life.

Both companies rejected the claims, and a federal magistrate in late June recommended dismissing the lawsuit, saying it was "rambling, difficult to decipher and borders on delusional."

Records show Santa Perez had a history of minor offenses in all three states where he had lived. One arrest painted a troubling portrait of him when he was charged with trespassing after being fired from a company that makes kayaks in Greenville, South Carolina.

His boss told officers in October 2014 that Santa Perez had been throwing tools and not acting right in the week before he was let go and that he "was afraid of what Omar might do," according to a police report.

A police officer said Santa Perez was on the ground, refusing to leave and appeared upset and disoriented. He mumbled "about the war and the economy" and talked about how he was upset about being fired, the officer said in a report.

Neighbors who lived in a Cincinnati-area apartment building that Santa Perez moved into this year gave conflicting descriptions of him.

Some told local news outlets that he usually looked angry and wouldn't say hello while another said he always appeared to be in a good mood.

The body of one of the three men killed in the shooting was recognized by the coroner. Dr. Lakshmi Sammarco had met 25-year-old Prudhvi Kandepi at a local Hindu temple. The two also shared the same hometown and language, Telugu. Sammarco posted Thursday on Facebook, asking how officials will explain to his parents "they will never see their son again because of a senseless shooting in a foreign country."

The local Telugu Association of North America office said they plan to help Kandepi's father. He wants his son's body to be taken back to India.

Kandepi was an engineer who worked as a consultant for the bank.

The other two victims were identified as bank employee Luis Calderon, 48, and Richard Newcomer, 64, a contractor who worked for Gilbane Building Company.

One of the wounded was in fair condition Friday and another patient was in serious condition at University of Cincinnati Medical Center.

Hundreds of people gathered Friday to remember the victims at a vigil in Fountain Square, just steps from the site of the shooting.

Police and city officials said there could have been more victims if the shooter's gun hadn't malfunctioned and if police hadn't been nearby.

Cincinnati Mayor John Cranley praised the officers who confronted and took down the shooter.

"If he had gotten on the elevator, gone up to a floor, if he had been there earlier or a little bit longer, many more people would have been killed," Cranley said.