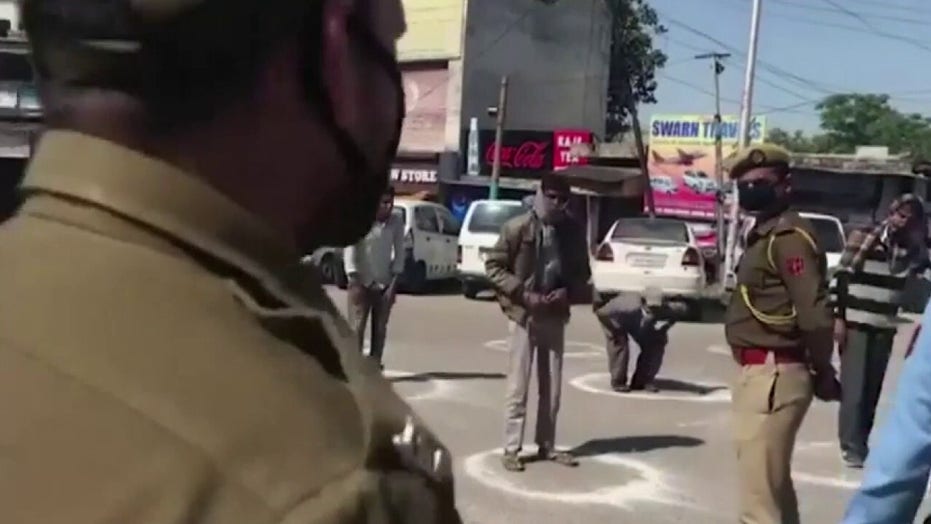 Authorities in India are investigating after a group of migrant workers was seen being sprayed with a chemical solution upon their arrival to a village, following a nationwide lockdown put in place to stop the spread of coronavirus.

The lockdown announced last week by Indian Prime Minister Narendra Modi has led to a mass exodus of migrant workers from cities to villages across the country. Many were forced to make the journey on foot after the country's rail system was shut down.

"I walked two days, two nights to reach here, and both the children have blisters on their feet," Ram Bhajan Nisar, a migrant worker from the north Indian state of Uttar Pradesh who was working in New Delhi, told The Associated Press.

As of Tuesday, India has at least 1,251 positive cases of COVID-19 and at least 32 deaths, according to a tally by Johns Hopkins University. Of all the cases reported in the country, at least 102 people have recovered from the virus, according to the tally.

Modi has apologized for the 21-day lockdown he ordered and said he had “no choice."

But those making the trek from India's major cities to villages have found a less than warm welcome.

A video shared Monday on Twitter by a reporter from The Times of India shows a group of migrants in the city of Bareilly squatting on the ground as they are sprayed with a "chemical solution."

The video, which has over 1 million views, shows fire officials dousing the individuals with the spray.

A group of people, described as migrant workers returned from their cities of work amid India’s lockdown, were sprayed with a chemical solution containing bleach, local media reported. (Randeep Singh via Storyful)

Bareilly's district magistrate later said in a tweet that the video "has been [under] investigation" and those affected are being treated under the direction of the Chief Minister's Office.

"The team of the Bareilly Municipal Corporation and fire department officials were asked to sanitize buses but in their enthusiasm they sprayed the workers too," he wrote.

According to the BBC, which viewed the whole video, officials shouted instructions over a megaphone asking the workers to close their eyes and mouths before spraying them.

The large crowds of migrant workers defying the three-week lockdown to head home, has resulted in some violent clashes. On Sunday, in the western city of Surat, police battled about 500 migrants wanting to go home in other parts of India because they had no work.

On Monday, the Indian Council of Medical Research, India's top medical research body, said the country conducted 38,442 tests for the virus as of March 29. India has a population of 1.3 billion people.

The governments of the states of Uttarakhand, Chhattisgarh, Rajasthan and Madhya Pradesh have announced in the past few days that intensive care units, ventilators and staff of private hospitals might be requisitioned to treat virus patients.

People who have been quarantined in India for suspected exposure to the virus said conditions in government facilities are unsanitary and could potentially foment the outbreak.

"The conditions here are so filthy that if a person spends a few days here, even if they are healthy, they will get the virus,” Azad Ahmad Padder, a 40-year-old doctor who was sent to a quarantine, told the AP. “It feels like we are living in a detention center.”