The governor of Oklahoma, Kevin Stitt, has become the first United States governor to announce that he has tested positive for the coronavirus.

The Centers for Disease Control and Prevention (CDC) reported nearly 61,000 new cases of coronavirus in the U.S. on Wednesday -- with Arizona, Florida and Texas accounting for 40 percent of the total.

Florida reported 10,085 new cases and has surpassed 300,000 confirmed cases in the state with over 4,500 deaths, according to its Department of Health.

The Sunshine State, which is supposed to host the Republican National Convention next month, is now seeing shortages of ICU beds as the virus has caused a spike of 453 hospitalizations over the last 24 hours.

Gov. Ron DeSantis, a Republican, has refused to implement a statewide mandate on masks and continues to push for schools to reopen in the fall.

However, he did appear publicly wearing a mask for the first time to attend a news conference this week with Miami-Dade County mayors. 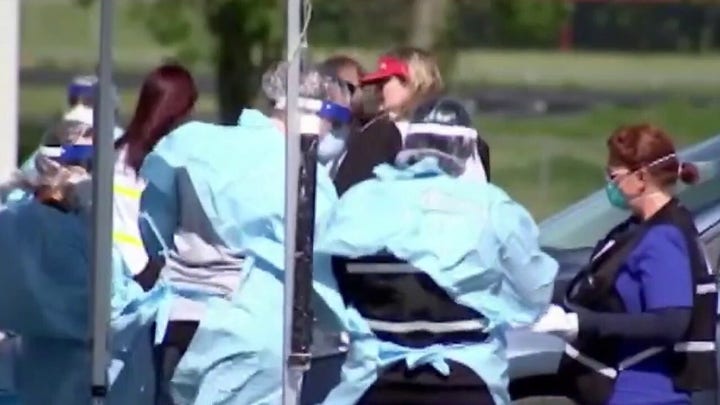 Arizona and Texas have called in refrigeration trucks to handle the morgue space shortages according to a local Fox 6 news outlet.

Arizona reported 3,257 new cases Wednesday according to the state’s Department of Health, and Maricopa County, where Phoenix is located, accounts for nearly 65 percent of the state’s cases.

Reports of overcrowed hospitals, exhausted health care workers and a shortage of available testing equipment have emerged with the recent surge in coronavirus infections.

Phoenix Mayor Kate Gallego blamed the strain of the virus on Republican Gov. Doug Ducey who has also refused to implement a mask ban.

A reported 26 percent of the coronavirus tests returned positive for the virus earlier this week, the mayor told Business Insider. The World Health Organization (WHO) has advised stay at home orders for areas with over a five percent positive testing rate.

City officials in Texas are calling for cities to re-enter lockdown as coronavirus cases have continuously set new records over the last few weeks. Texas reported 10,745 new coronavirus cases Wednesday, the highest number of new cases reported within a day since the outbreak, according to the state’s Department of Health.

“Not only do we need a stay home order now, but we need to stick with it this time until the hospitalization curve comes down, not just flattens,” Hidalgo said on Twitter Sunday. “Many communities that persevered in that way are reopening for the long haul. Let’s learn from that & not make the same mistake twice.”

Gov. Greg Abott has issued a statewide mask mandate and has pushed back the school openings, allowing them to continue teaching online classes in the fall.

But the Republican governor told a local talk show host Tuesday that he would not be reinstating lockdown measures, adding that once they reopen people will just get sick again.

Health officials have warned that the death rate will likely increase after the recent spikes in cases, adding that the rise in cases is not just because testing capabilities have increased.

“In April and May, we were dealing with 100,000 cases a day,” World Health Organization official Michael Ryan said during a press briefing. “Today we’re dealing with 200,000 a day.”

“What we’ve seen during the month of June is an acceleration in the number of cases, what hasn’t accelerated with that yet, are the number of deaths,” Ryan said last week.

“We’ve only really experienced this rapid increase in cases over the last five to six weeks,” Ryan said. “So I don’t think it should be a surprise if the deaths start to rise again.”