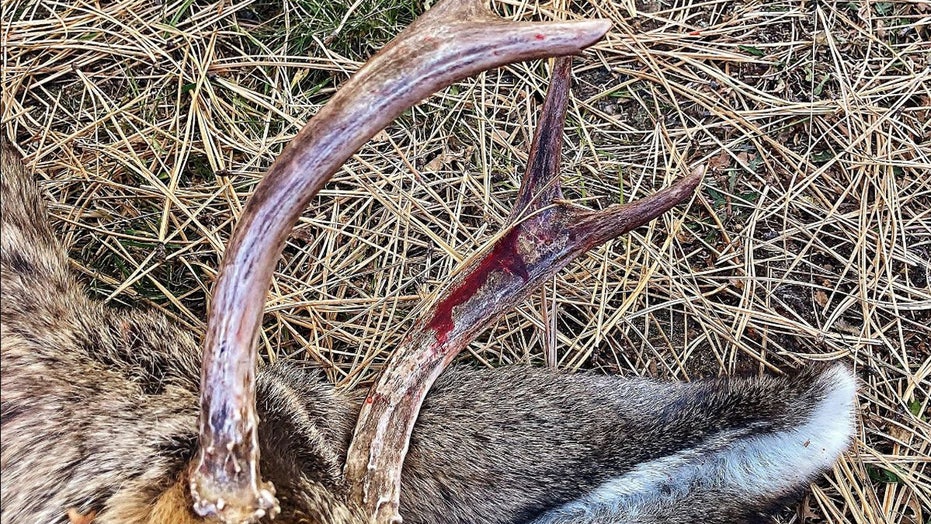 A 73-year-old woman in Colorado was cited with two misdemeanors after a buck deer she raised in her home gored her neighbor last week, according to officials.

Colorado Parks and Wildlife said in a news release that Tynette Housley of Black Forest admitted to wildlife officers she took in a days-old fawn into her home more than a year ago and raised it.

According to officials, the attack happened Friday morning, when the neighbor was out walking her dog.

The neighbor said she was "surprised to notice" the deer following her before it attacked, knocking her down and "trashing her with its antlers."

Blood stained the antlers of a young buck deer that attacked a woman walking her dog on a wooded trail near her Black Forest home on Friday. (Colorado Parks and Wildlife)

The attack went on for several minutes as the victim tried to run to a neighbor's house, and then to her own home.

"Repeatedly the deer knocked her down and gored her," CPW said. "The deer even continued to attack as she frantically opened her garage door."

The attack finally came to an end when the woman ran between two cars in her garage.

The victim suffered serious cuts to her head, cheek and legs. She was also bruised and hospitalized overnight.

A wildlife officer who responded to the scene discovered the deer with "fresh blood covering its antlers" that "aggressively" approached the officer, according to the agency.

The officer euthanized the deer and took it to CPW’s animal health lab in Fort Collins to test it for rabies and other diseases.

"The deer’s stomach contents confirm it was being fed by humans as it contained out-of-season foods including hay, grain, corn and possibly potato," the agency said.

Housley was cited with illegal possession of wildlife and illegally feeding wildlife, both misdemeanors. She was also issued a warning for possessing live wildlife without a license after she described keeping the buck in her home, her garage, and on her property, according to CPW.

“Feeding deer habituates them to humans. They lose their fear of humans and that leads to these outcomes that are tragic for both wildlife and people," McGee said in a statement. "Injured and orphaned wildlife should be taken to licensed wildlife rehabilitators.”