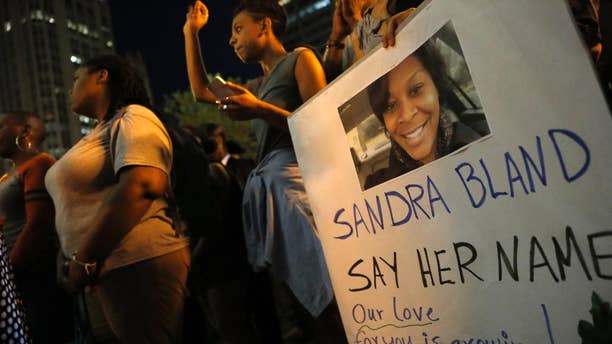 A demonstrator holds a Sandra Bland sign during a vigil, Tuesday evening, July 28, 2015, near the DuSable Bridge on Michigan Ave. in Chicago. Bland died in a Texas county jail after the traffic stop for failing to use a turn signal escalated into a physical confrontation. Authorities have said Bland hanged herself, a finding her family disputes. The death has garnered national attention amid increased scrutiny of police treatment of blacks in the wake of several high-profile police-involved deaths. (AP Photo/Christian K. Lee) (The Associated Press)

Texas authorities released additional footage from Sandra Bland's three days in a Texas jail, saying they wanted to dispel rumors that she didn't die in her cell but rather was dead before arriving.

Waller County Judge Trey Duhon said Tuesday that such conspiracy theories — including one that Bland's mug shot was taken after her death — have prompted death threats against county officials.

"Because of some of the things that's gone out on social media, this county has been literally attacked," he said at a news conference, adding that the FBI is investigating the most serious threats.

"Sandra Bland was alive and well" until she was found hanging on July 13 in her cell at the Waller County Jail, Duhon said. Authorities have ruled that Bland's death, three days after her arrest during a confrontational traffic stop, was a suicide.

The video released shows her arriving at the jail, being questioned by a jailer filling out forms, making phone calls, getting her mug shot taken, sleeping in her cell and being taken in and out.

She's calm when she arrives at the jail, sometimes smiling and at one point putting her head in her hands. The jailer let her use the phone at the booking desk instead of the pay phone in her cell, and she was seen talking with animation during some of the calls. The video has no audio.

Authorities have said Bland, a black 28-year-old from suburban Chicago, hanged herself with a garbage bag, a finding that her family has questioned, saying she was happy. She was in custody for allegedly assaulting the white state trooper who pulled her over for an improper lane change.

Her sister, Sharon Cooper, did not return a call from The Associated Press seeking comment Tuesday.

The death has garnered national attention amid increased scrutiny of police treatment of blacks in the wake of several high-profile police-involved deaths. In Chicago, more than 100 people gathered downtown Tuesday night for a vigil and protest.

On Monday, an initial toxicology report was released for Bland that two experts said raised the possibility that she may have used marijuana while in custody. Prosecutor Warren Diepraam has said information on her marijuana use may be relevant to the case in determining her state of mind.

The amount of THC, one of the active components of marijuana, in Bland's system was 18 micrograms per liter, according to the report. That's more than three times the legal limit for drivers in Colorado and Washington, states that permit the recreational use of marijuana.

Capt. Brian Cantrell of the Waller County Sheriff's Office said Tuesday that he doesn't know if she could have used marijuana in the jail. He said there's no recent history of drug seizures there but noted things get smuggled into jails everywhere.

"I don't know if we'll ever get an answer to all the questions," said attorney Lewis White of Sugar Land, one of the committee members. "But our job is to get answers. There are going to be answers some people don't like."

The Texas Rangers and the FBI are investigating the case.