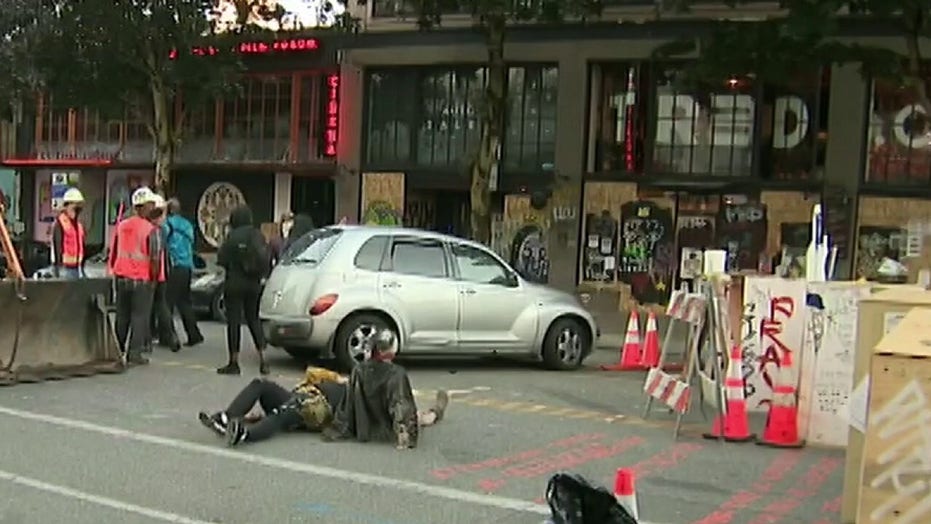 Seattle radio host on ‘CHOP’ zone barriers to come down

Organizers of Seattle's Capitol Hill Organized Protest (CHOP) are attempting to refocus their efforts toward a street outside the East Precinct and away from the tent encampment at Cal Anderson Park, according to a report on Sunday.

The switch in focus comes after some believe the park encampment is becoming difficult to manage and is potentially impacting the group's efforts in convincing the city to make changes in police reform. The area near the precinct also houses most of the protest's leadership.

“Basically, it’s to bring the attention and the focus back onto why we’re here, occupy protesters, which is to get our demands met,” organizer Angelica C told the Seattle Times. “And the only way we can do that is to occupy this precinct right here.”

A man walks toward tents in front of a closed Seattle police precinct Saturday, June 27, 2020, in Seattle, where a few streets are blocked off in what has been named the Capitol Hill Occupied Protest zone. (AP Photo/Elaine Thompson)

Roughly three weeks after the occupation protest began, organizers have struggled to secure the park encampment, which has seen violence, as well as the anger of local businesses and residents, the paper reported. The encampment has also drawn a fairly large homeless population, and some are now describing the area as a political liability.

Harry “Rick” Hearns –­ who said he helps provide security for CHOP and was seen cooking barbeque near the precinct –­ said Cal Anderson was indeed a distraction: “They need to clean out that whole park."

Duncan, a 23-year-old Washington state resident located in one of the park's tents, told the Seattle Times he would probably move to the precinct, adding that organizers are routinely forced to go over to the park and deal with security.

Others feel that people go to Cal Anderson Park to pitch a tent and get regular meals, instead of supporting their cause, according to the paper.

CHOP's goals include investing more in black communities, reimagining policing in cooperation with community leaders, as well as pushing for accountability measures and statewide reform of police unions.

People walk among tents in a city park Sunday, June 28, 2020, in Seattle, where several adjacent streets are blocked off in what has been named the Capitol Hill Occupied Protest zone. Seattle Mayor Jenny Durkan met with demonstrators Friday after some lay in the street or sat on barricades to thwart the city's effort to dismantle the protest zone that has drawn scorn from President Donald Trump and a lawsuit from nearby businesses. (AP Photo/Elaine Thompson)

“It makes us have to worry about extra stuff going on down there that doesn’t necessarily pertain to why CHOP’s here,” said Rooks, who self-identifies as an organizer.

Mayor Jenny Durkan said last week that the city is working with the community to bring the CHOP zone to an end and that police soon would move back into a precinct building they had largely abandoned in the area.

Several organizers, however, see the building as a key source of leverage, with some demonstrators suggesting they were prepared to form a human chain around it, the Seattle Times reported.