Fox News' Lawrence Jones argues 'kids are being robbed of opportunity' in Chicago after another bloody weekend.

There were 60 people wounded in 40 shootings reported throughout Chicago over the weekend, including nearly a dozen children, police said Monday.

Seven people were killed and 60 total people were shot throughout the Windy City from 6 p.m. Friday through 11:59 p.m. Sunday. Shooting victims ranged in age from 12 to 58, and included 11 people under the age of 18.

The wounded juveniles ranged in age from 12 to 17 years old, according to Chicago Police Department (CPD) records. One of the 17-year-olds suffered a self-inflicted gunshot wound to his hand on Saturday afternoon. He was taken to an area hospital and is in good condition, police said.

In a different incident, 37-year-old Fallon Harris was arrested and charged with fatally shooting her 12-year-old son on Saturday morning, CPD said. According to prosecutors, Harris shot the boy inside their South Chicago home just before 10:30 a.m. over a missing memory card, local affiliate Fox 32 Chicago reported.

According to video footage from inside the home, Harris asked the boy about the missing card, at which time he said he did not know where it was, prosecutors reportedly said. She then allegedly shot him, according to prosecutors and police, and reportedly left him "conscious and crying." She then allegedly asked him for the card a second time, and shot him again after he said he did not know, according to the report.

Prosecutors reportedly described in horrifying detail how video showed the boy collapsing to the kitchen floor.

A witness called police after discovering the boy unresponsive. He was shot at least once in the head and could not be saved, police said. 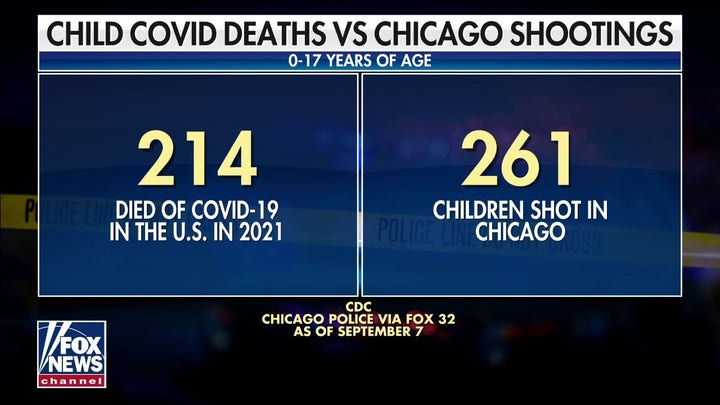 Harris was charged with first-degree murder.

Hours later, just after 9:30 p.m. Saturday, a group of people were walking to their vehicles in the city’s West Pullman section when someone fired several shots from inside a different car, police said. A 42-year-old woman was fatally wounded, while five others – including a 15-year-old girl, were in fair or critical condition. One of the victims was an off-duty firefighter.

On Friday, two boys – ages 12 and 13 – were standing on the front porch of a West August Boulevard home in Chicago around 10:30 p.m. when someone opened fire from inside a silver SUV. Both boys were wounded, but are expected to survive.