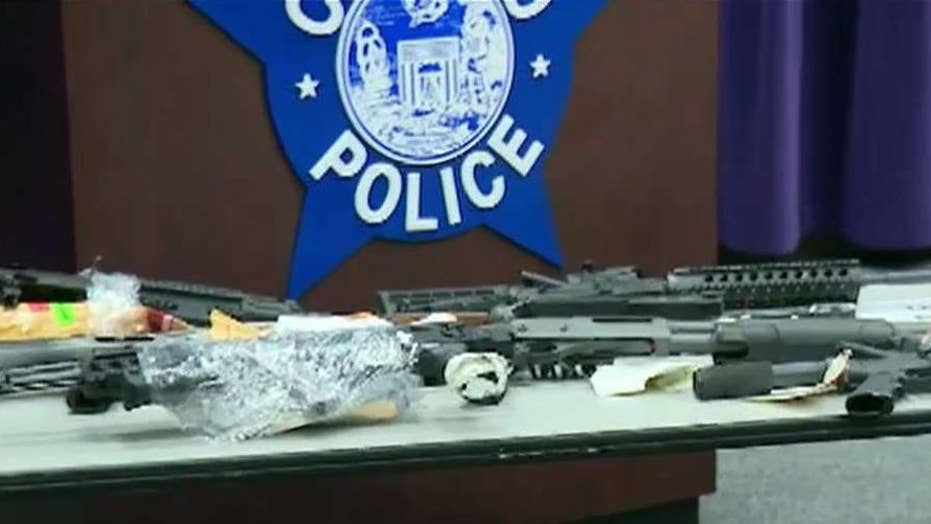 Chicago police announce 10,000 guns have been taken off the streets in 2019

Chicago police announce they have seized over 10,000 firearms with a month still left to go in the year; Matt Finn reports.

The Chicago Police Department announced this week that it has seized more than 10,000 guns so far this year – an average of one gun every 48 minutes – an uptick from one gun-per-hour the previous year, according to CPD.

“I’m immensely proud of CPD for taking 10,000 guns off the streets this year,” Chicago Police Superintendent Eddie Johnson said. “We really need systematic change to prevent these guns from ever finding their way into the city.”

“We sit in between Wisconsin and Indiana, who have lax gun laws and it’s easy for the criminal element in Chicago to go across the borders, fill up a duffle bag with guns, and then distribute them throughout our city,” Johnson said. “So until we stop those kinds of flows we’re going to continue to see this problem and it just befuddles me that we can’t pass universal background checks.”

Fox News submitted Freedom of Information Act requests to other police departments around the country to see how many guns they seized in comparison to Chicago.

In all of 2018, Chicago police seizures nearly doubled NYPD's. Chicago recovered 9,800 compared to New York’s 5,200. LAPD did not readily have its 2018 numbers available.

Johnson told Fox News he thinks the system needs to be reformed in Chicago, creating a “culture of accountability” that gives repeat gun offenders stricter sentences to deter them from pulling the trigger over and over again.

“We pick up somebody that’s used an illegal gun. Actually used it. Fired it off. On the books it may say that that’s a felony but at the end of the day when it’s all said and done that guy’s treated like a misdemeanor until about the third time we catch them, then it gets serious,” Johnson told Fox News. “The first time you squeeze the trigger you can kill somebody. That’s when you should be treated like that.”

Martin Prieb, a spokesperson for Chicago's Fraternal Order of Police Lodge 7, told Fox News that Chicago is plagued by gangs and violent crime — which simply means there will be more guns in the city. Prieb said officers aim to recover as many firearms as possible.

“One of the things police focus on is getting the guns and getting them arrested with guns. That’s a good felony charge,” Prieb said.

But Johnson and Prieb said arresting a suspect with a gun doesn’t always equal a felony charge or a strong sentence.

“That narrative that Chicago has some of the strictest gun laws, that’s just not true,” Johnson said. “If it was true we wouldn’t be talking about this. We have gun laws on the books that to me are lacking in certain areas. We need to enforce them more.”

Late this summer, CPD highlighted one case in which officers seized more than 60 guns from a single home on the city’s southwest side. Fox News talked to some of the people who live near the house that was raided. One mother said she worries for her children.

Another man who also asked not to be named said Chicago’s gun problem is fueled by a black market.

“It's a trade. It's a lucrative trade and people have been trading and making money and doing this for years. This is nothing new,” he said.

In recent years, there’s been criticism toward Chicago’s judges and prosecutors for going too soft on Chicago’s gun trade and repeat gun offenders.

In August, the city’s mayor, Lori Lightfoot, publically demanded answers from judges that she says let gun offenders walk free on bond as low as a few hundred dollars.

"I need to understand from the judges who think that these people are not dangers to the community, how do I explain that to people on the west side and on the south side who, in many instances, are living in a war zone,” Lightfoot said.

Prieb told Fox News that morale among CPD officers is low because the rank-and-file is risking their lives to seize guns from offenders that aren’t fully prosecuted.

“I think this is happening in a lot of cities when you get these activist prosecutors who are sort of waging a battle with the police,” Prieb told Fox News.

The office of Cook County State’s Attorney, Kim Foxx, responded to some of the criticism, writing in a statement, “Our office has approved 92 percent of the illegal gun cases brought to us, and has convicted over 7,800 offenders since State’s Attorney Foxx has taken office."

Lori Post is a demographer who researches violent crime at the Buehler Center for Health Policy and Economics at Northwestern University’s Feinberg School of Medicine. Post told Fox News Chicago’s violent neighborhoods are a hotbed for firearms.

“I think that if you live in a violent place you think, ‘I need to protect myself and I need a gun,” Post said. “Guns beget guns. Other guns. And people may feel they need it for self-protection if we have dangerous neighborhoods. We hear stories on a daily basis around here so maybe people feel they need it for protection.”

“Those neighborhoods are so economically segregated, meaning a lot of poverty. Like, if you draw a line and put a fence up, and they are also racially segregated as well, too. So minority persons are disproportionately affected by poverty and by gun violence,” Post said.