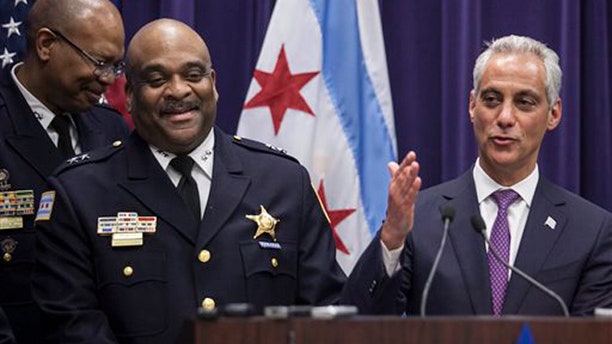 Eddie Johnson didn't apply to become Chicago's police chief, but his appointment as interim superintendent in line for the top job could address many of the issues facing Mayor Rahm Emanuel and a city reeling from a police shooting scandal.

After firing the previous superintendent over the shooting, Emanuel has searched for a replacement during a spike in violent crime, low department morale and intensified scrutiny of police shootings — in particular the death of Laquan McDonald, a black teen shot 16 times by a white officer. Bypassing three finalists recommended by the police board, the mayor chose an insider who will face immediate pressure to bring about change within a force he's been part of for 27 years.

Johnson was named interim chief Monday and Emanuel has asked him to apply for the job permanently. He will take over a department criticized for lax accountability on police misconduct and a "code of silence" culture that protects problem officers.

A former commander on the South Side, Johnson is black and a Chicago native, satisfying concerns from some aldermen after two consecutive white superintendents came from outside Chicago. Former colleagues credit Johnson with the ability to unify officers.

Johnson said his focus would be rebuilding trust.

Johnson grew up in the rough Cabrini Green housing project until age 9, when his family moved to a South Side neighborhood where he still resides. He joined the police department in 1988 and held supervisory roles including chief of patrol, where he commanded 8,000 officers.

Emanuel said Johnson would both have officers' backs and also hold them accountable.

"He has the command, the character and the capability to lead the department at this critical juncture," the mayor said.

The black and Latino caucuses of the City Council said they were pleased with Johnson's selection, but some community leaders raised questions about the choice and criticized Emanuel for sidestepping the finalists.

The Revs. Jesse Jackson and Ira Acree said the mayor's actions undermined the police board. Emanuel won a tough re-election bid last year — in which black and Latino votes were key — after vowing to take community concerns into account more. Emanuel has also been accused of a cover-up in the McDonald case for releasing police video of the shooting the video only after a judge ordered it.

"You would think that in the aftermath of the Laquan McDonald police scandal, that Mayor Emanuel would have learned his lesson and honored his pledge of giving Chicago ultimate transparency in the pursuit of rebuilding public trust," Acree said.

Jackson said the police department culture needs changing and the way an insider was chosen "complicates and compounds the crisis."

Emanuel, criticized during his five years in office for not always listening to the public, defended his approach as the result of spending months gathering community input. Johnson said he was best equipped to make changes, and welcomed outside help, including a pending investigation by the U.S. Justice Department.

Retired officer Bruce Rottner called the appointment a "brilliant move." He worked with Johnson when an off-duty officer was fatally shot in 2010. Rottner said Johnson was calm, knowledgeable and had officers' respect. However he said it will hard to change the "code of silence."

"Can he have an impact on that wall of silence? ... To some degree he can, but just to some degree," he said.

The announcement comes days after the black and Latino caucuses called on Emanuel to seek a minority and someone from within the department. The Black Caucus stopped short of endorsing Eugene Williams, a black deputy chief in Chicago who was a finalist.

"I believe he thought the qualities (we wanted) made sense, and maybe he picked somebody who fit those qualities," he said Monday.

Latino Caucus members had been upset that interim Superintendent John Escalante, who was named to the post after Garry McCarthy was fired and applied for the permanent post, wasn't a finalist.

A city ordinance allows Emanuel to appoint an interim chief and ask the board for new finalists. Police Board President Lori Lightfoot said Monday it had no comment on Emanuel's moves but would convene as soon as possible to "decide appropriate next steps."