Charges against a Philadelphia police officer who was recorded striking a student protester last summer were dismissed Friday.

Prosecutors had not presented enough evidence to proceed with charges against former police Staff Inspector Joseph Bologna during a preliminary hearing, Judge Henry Lewandowski said according to WTXF-TV. He had been charged with simple assault, recklessly endangering another person, and possessing an instrument of crime.

"This is really a great victory for those people like Inspector Bologna, who risked their lives for strangers, which is what he was doing," the inspector's attorney Brian McMonagle said outside court after the charges were dismissed. "This destruction of his life and his career should have never occurred. And we’re just happy today that justice was done for him and his family."

DOJ'S CAPITOL RIOT RESPONSE AND PREPARATION TO BE REVIEWED BY IG 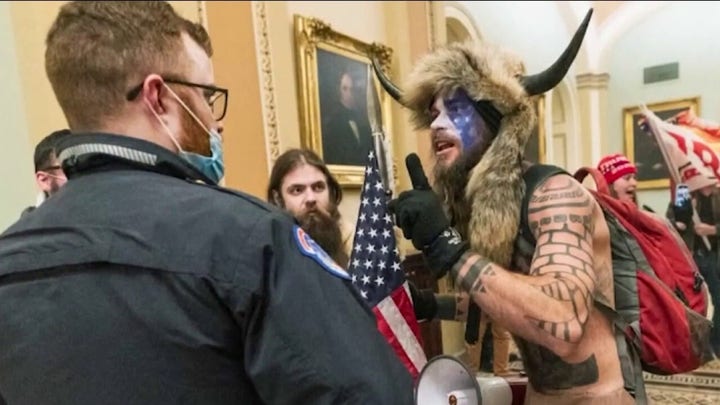 Bologna, 54, was seen hitting Temple University Evan Gorski, 21, in the back of his head with a baton during a June 1 protest over the death of George Floyd. Gorski's lawyer said his client needed 10 staples and 10 stitches for his wound.

Bologna, a 30-year member of the force, left the courthouse without commenting. He was suspended with intent to dismiss, but his attorneys said Friday that he now has the option to seek full reinstatement. He has not yet decided.

"Justice must be applied equally and in an even-handed manner," District Attorney Larry Krasner said in a statement issued. "No one is above the law. We fully intend to pursue this case to a just conclusion."

John McNesby, president of the Philadelphia Fraternal Order of Police Lodge No. 5, which represents the city's officers, called the allegations against Bologna "baseless."

"We promised a vigorous defense to these baseless allegations and charges filed by our District Attorney," McNesby said in a statement to Fox News.  "Our DA attempted to railroad a highly decorated and well-respected member of the Philadelphia police department. We’re happy to bring closure to this case for Bologna, a 30-year member, who has served this city with respect and integrity."

"Our union and police officers will not stand-by and watch Inspector Bologna get railroaded by a politically, opportunistic [district attorney], who has turned his back on Philadelphia police and the city," he said at the time.

McNesby did not immediately respond to Fox News' request for comment.