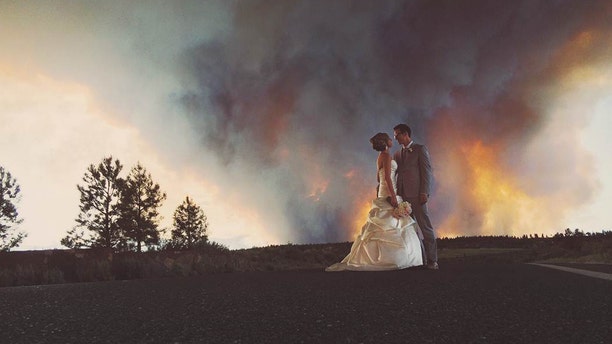 In this Saturday, June 7, 2014 photo provided by Josh Newton, newlyweds Michael Wolber and April Hartley pose for a picture near Bend, Ore., as a wildfire burns in the background. Because of the approaching fire, the minister conducted an abbreviated ceremony and the wedding party was evacuated to a downtown Bend park for the reception. (AP/Josh Newton)

A wildfire that disrupted an Oregon couple's wedding also gave them the photograph of a lifetime.

A fire truck rolled up at Rock Spring Ranch near Bend with sirens blaring Saturday and the wedding party was told to evacuate, The Oregonian reported.

The minister conducted an abbreviated ceremony. Everyone cheered and began to evacuate to downtown Bend's Drake Park for the reception.

As guests headed for the cars, wedding photographer Josh Newton took some photos of the couple with the wildfire raging in the background.

Michael Wolber called it "the most beautiful ceremony either of us could have ever imagined." He and his wife, April Hartley, live in Aloha and both work at Nike.

"It's terrible to be evacuated from your own wedding," said Lisa Clark, a fire information officer with the Central Oregon Interagency Dispatch Center. "But it's a story for the rest of their lives and nothing that could be duplicated."

The wedding venue was on the edge of the wind-pushed fire and deputies and fire trucks were driving through the area telling people to evacuate as a precaution.

"It is an accurate picture," she said Tuesday about the widely viewed photo.

Firefighters were probably sympathetic to the wedding party with the disruption and permitted the quick ceremony.

"I don't think the firefighters would have allowed the extra few minutes if it had been that critical," Clark said.