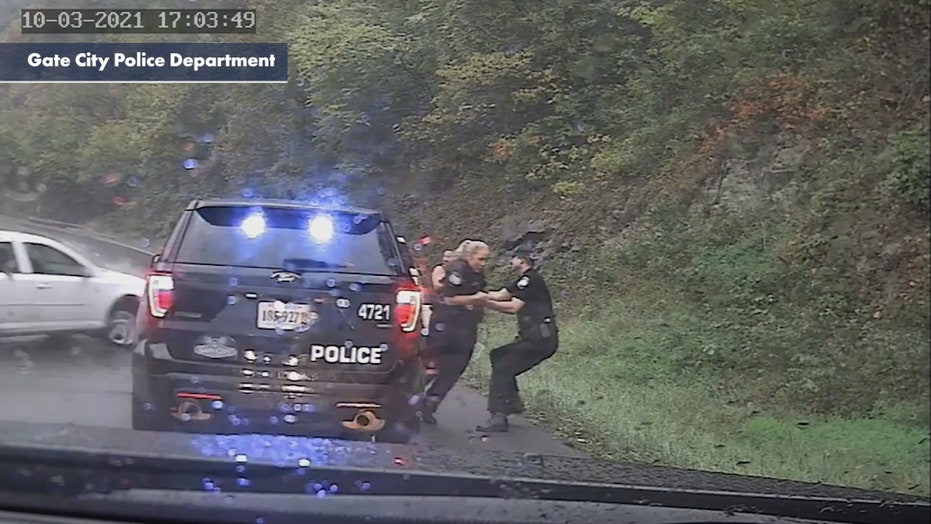 Caught on cam: Officers narrowly escape crash on side of highway

Two police officers barely escaped serious injury Sunday when a car crashed into a patrol SUV parked on the side of a highway in Gate City, Virginia.

The Gate City Police Department said officers Jessica McGraw and Matthew Stewart were investigating a crash around 5 p.m. on U.S. Highway 23 when the incident happened.

The officers were standing next to McGraw’s patrol car on the side of the road when a white car traveling in the opposite direction lost control, crossed the median and hit the parked patrol car.

Dashcam video shows the impact of the passenger vehicle rapidly forced the patrol vehicle off the shoulder of the road toward the conversing officers. Stewart caught a glimpse of the vehicle coming towards them and was able to quickly react, grabbing McGraw and pulling her out of the path of the spinning patrol car.

According to the police department, McGraw then checked on the driver of the white car and called for rescue and fire units to respond to the scene.

"It is my belief the quick actions of Officer Stewart not only saved himself from serious bodily injury or death but also that of Officer McGraw," Chief Justin Miller said in a release. "The only minor injury reported was from Officer Stewart who stated his leg ‘went numb like I had a bad charley horse.’ Upon review of the dash camera footage it appears the brush guard of Officer McGraw’s patrol vehicle brushed against Officer Stewart’s leg as he pushed McGraw out of the way."

The police department said the officers escaped without serious injury and both are expected to return to duty.

Virginia State Police investigated the crash involving the patrol car. The driver of the white car was issued a citation for failure to maintain control of their vehicle, according to the police department.