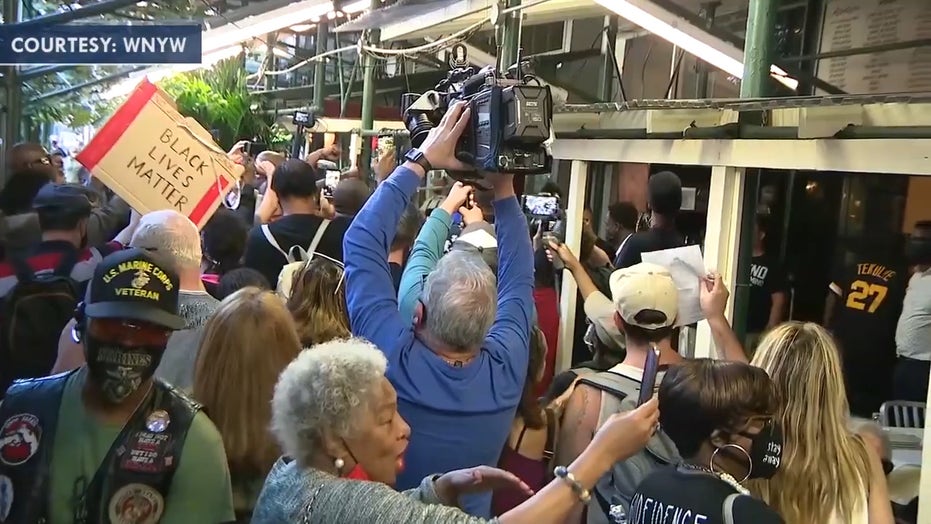 BLM Greater New York held a protest outside Carmine's Italian Restaurant on the Upper Westside Monday in response to three tourists who were arrested and charged following a fight over proof of vaccination.

Carmine’s Italian Restaurant in New York City released new footage of the fight that broke out last week between three female tourists and a hostess over proof of vaccination, resulting in their arrests.

The restaurant released clearer surveillance footage this week showing the three tourists surrounding the hostess before a fight broke out. Cell phone footage last week captured the fight outside Carmine’s after it had begun.

"Three women brutally attacked our hosts without provocation, got arrested and charged for their misconduct, and then, over the last several days, had their lawyer falsely and grossly misrepresent their acts of wanton violence in a cynical attempt to try to excuse the inexcusable," Carmine's owner Jeffrey Bank said in a statement, according to WABC.

The three Texas tourists, all of whom are Black  - Kaeita Nkeenge Rankin, 44, Tyonnie Keshay Rankin, 21, and Sally Rechelle Lewis, 49 - were arrested and charged with assault and criminal mischief following the incident, and are now calling for the charges to be dropped, citing the hostess made racist remarks and provoked the fight. They were released after being issued desk appearance tickets scheduled for Oct. 5.

"It is unfortunate that Carmine’s and their hostess were able to lie to the police to avoid being held accountable for this hostess’ racism. She physically and verbally provoked confrontation, and then played the victim to criminalize these three Black women," Justin Moore, an attorney for the women, said, according to PIX11.

Moore pushed back on Carmine's newly released footage in a press statement sent to Fox News on Tuesday, saying the video was "selectively edited."

"Last night, Carmine’s NYC released carefully and selectively edited footage from the incident that occurred last Thursday between three women from Texas and a Carmine’s hostess. What was originally reported as these three women fighting over not having proof of vaccine has morphed, by Carmine’s design, into a random fight that had no provocation from their employee in question," Moore said in the statement.

"We have seen Carmine’s narrative change drastically since their hostess lied to police and the media last Thursday to now. In response to being exposed as lying to the police and to the media, they have retained a crisis management firm to prevent addressing the fact of their racist behavior, they have avoided holding themselves accountable for their treatment of black customers and instead they have endeavored to launch personal attacks against attorneys and community members who have only asked them for transparency."

"I believe that this New York City vaccine passport will be used to keep Black people out of spaces, and if we don’t stop it now then the police will use it as an excuse to harass and arrest our people," a group spokesman told Fox News in a statement on Monday.

BLM Greater New York said it also wants the charges dropped against the women and for Carmine's "to pay for promoting a false narrative and creating fake news reports."

The mayor’s office did not immediately respond to Fox News’s request for comment regarding BLM Greater New York’s statement and if the vaccine mandate targets Black people.

The group also held a protest outside the restaurant’s Upper Westside location on Monday night, where BLM Greater New York’s founder, Hawke Newsome, said that the hostess had made "snide" remarks to the women. He added that the situation escalated when three men joined the party, but two of them did not have identifications to match their vaccine cards.

"When these women arrived at this restaurant behind us, words were exchanged. In addition to that, vaccination cards and IDs were exchanged," Newsome said Monday at the protest.

"When they were seated, the hostess came by and made another snide remark to them. As you all know, three gentlemen appeared at the front. All three of whom had proof of vaccination, but two did not have identification. The women said, ‘If we can't stay here, and we all can't eat here, then we will leave.’ As these women were walking out of the restaurant, the employee said something, and lunged at them," he said.

"Another employee restrained that hostess. That doesn't seem like an innocent victim to me. That seems like an attack agonizer to me."

Carmine’s owner has pushed back on the claims that the hostess made racial remarks toward the group, saying no such words were exchanged.

"My team members work too hard to serve our guests, work too hard to comply with New York's vaccination requirements, and still suffer too much from the attack for me to allow these false statements to stand," Bank said in his statement.

Video from the protest also showed protesters confronting and yelling gay slurs at a member of the Guardian Angels, who was standing near the group.