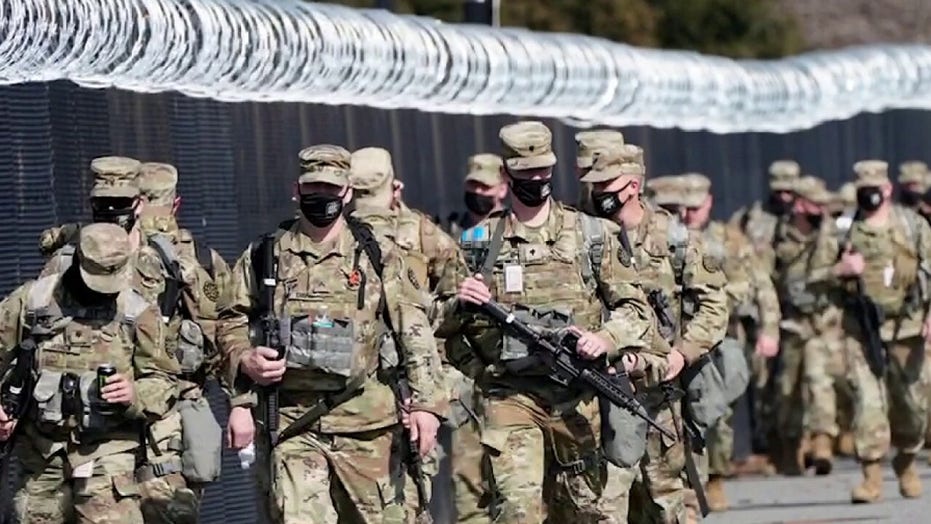 Chairman of the National Guard Association Michael McGuire argues 'it's time to return our guardsmen home' and back to their communities.

U.S. Capitol Police officers who experienced the Jan. 6 riots at the U.S. Capitol have taken to social media to share their experiences of that day.

Their stories were shared in snippets titled "Stories from January 6" on the agency’s Twitter and YouTube page.

Ethan Seitz, 31, of Bucyrus, Ohio, outlined in red by the source, joins other rioters who stormed the U.S. Capitol on Jan. 6, 2021, in Washington.  (U.S. District Court-District of Columbia via AP)

In one video, Captain Neysha Mendoza says she was concerned that a member of congress would get injured if one of the rioters were able "to get to them" after breaching the Capitol.

"That was my fear factory, because I realized that’s what they were there for," Mendoza says. "In the beginning you just think, well, they’re trying to disrupt congress. And then somewhere along the way you realize, they’re actually there to hurt people."

Officer Winston Pingeon, who was dispatched to the Lower West Terrace of the Capitol, says he could hear his fellow officers "begging for help on the radio."

"The level of severity and the duration of that day that we experienced was just something I could not have imagined," Pingeon says. "And there were times there when I would look out and see thousands of really angry people. With just evil in their eyes. And there were multiple times when I thought I might not make it out of here alive."

More than 300 people have been charged so far in the Jan. 6 riot and prosecutors have said up to 100 more people are expected to face charges. The most serious conspiracy charges have been brought against members of the Oath Keepers and fellow extremist Proud Boys faction, who authorities say came to Washington prepared to stop the peaceful transition of power.

USCP has not held a press conference on the events of Jan. 6 though the agency released a YouTube video early last month featuring Acting U.S. Capitol Chief Yogananda Pittman making a statement on the matter.

Fox News has reached out to USCP with a request for a comment but did not hear back before publication.