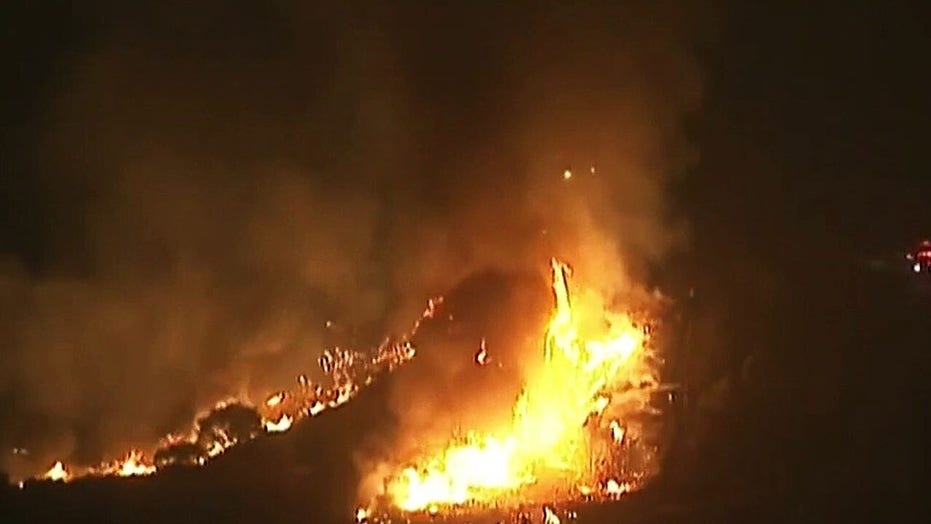 California firefighters racing to a contain a massive blaze that has erupted north of Los Angeles fear that sweltering temperatures Friday combined with possible gusty winds could further fan the flames.

The Lake Fire as of this morning has burned 11,000 acres and is only 5% contained after breaking out in a dense forest Wednesday afternoon, according to Cal Fire. Hot and dry conditions are expected across Southern California today with temperatures soaring past 100 degrees, leading numerous counties to be placed under excessive heat warnings and watches.

“This will be a major fire for several days,” said Chief Robert Garcia with the U.S. Forest Service.

A firefighter works against the Lake Fire in Angeles National Forest on Wednesday. (AP)

HEAT WAVE CONTINUES ACROSS SOUTHWESTERN US

By Thursday night, the blaze threatened more than 5,400 homes. Flames from it have raced across ridges and steep slopes, including in some areas that had not burned since 1968, fire officials said.

Light winds and scattered thundershowers early Thursday helped firefighters tame the flames somewhat but Friday's forecast is warning of “near critical” fire conditions because of the heat and possible gusty winds, officials added.

Preliminary damage assessments have found that at least three structures burned, but authorities warned the toll would likely be higher.

About 100 rural homes have been evacuated in the Lake Hughes area of the Angeles National Forest, some 60 miles north of downtown Los Angeles.

A burned vehicle rests along Pine Canyon Road as the Lake Fire burns in the Angeles National Forest. (AP)

Kenny Reynolds was among those who lost their homes, describing to KABC-TV how the flames came down the hill and across the street, “engulfing [it] on both sides.”

Reynolds and others retreated, “and then it just kind of rolled in,” he said. “It was taking everything as it kind of went down.”

Evacuation centers have been designated for residents and animals, but because of coronavirus concerns, people were told to stay in their cars in the parking lots.

The cause of the Lake Fire, meanwhile, is under investigation.

Firefighters work near a home as the Lake Fire burns in the background on Wednesday. (AP)

Several new fires also erupted Thursday, the largest being near the Los Angeles suburb of Azusa. It burned nearly 4 square miles of brush but was moving away from homes. However, some evacuations were ordered.

Another blaze came dangerously close to some homes in Corona, east of Los Angeles, and another fire in eastern Sacramento County burned about 500 acres before firefighters stopped its forward spread.

The heat wave hitting California today is expected to last through the weekend, bringing triple-digit temperatures and extreme fire danger to several parts of the state.