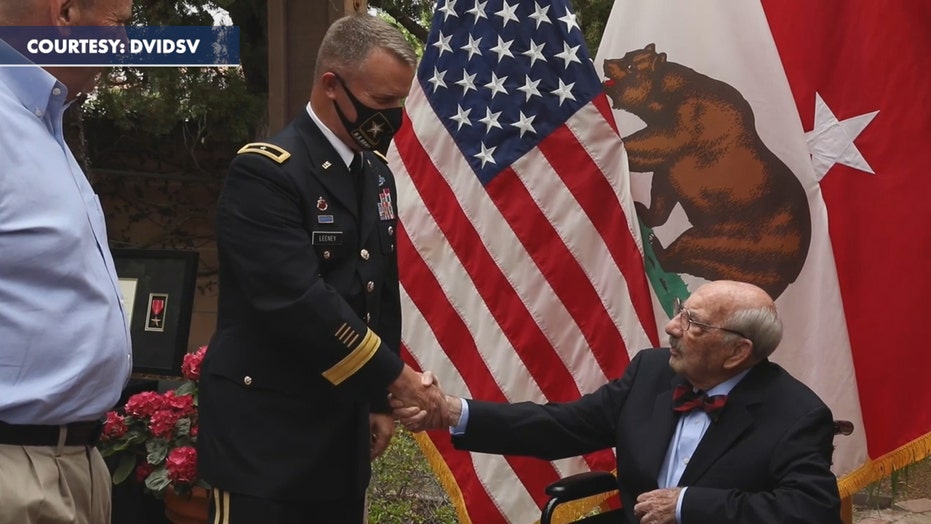 WWII vet receives bronze medal 75 years after it was awarded

A California World War II veteran has finally received the Bronze Star Medal 75 years after earning it, according to the California National Guard.

A California World War II Army veteran has finally received the Bronze Star Medal 75 years after earning it, according to the California National Guard.

Ubaldo "Joseph" Ciniero, 95, was first stationed in France, where he fought in combat in January of 1945. His division was later stationed in the Netherlands, where Ciniero crossed the Rhine River and advanced to the Harz Mountains, the California National Guard's magazine, Grizzly, reported.

"I am here today to right a wrong," U.S. Army Brig. Gen. Michael Leeney, deputy commander of the 40th Infantry Division in Los Alamitos, said as he presented Ciniero with the honor on Tuesday, according to the Guard. "This is a presentation of the Bronze Star Medal, which is one of the highest awards the Army has for valor in combat."

The star is awarded to U.S. military service members who served after Dec. 6, 1941, and completed a "heroic or meritorious achievement or service" while engaged in military operations, the Army's website states.

‘CAPTURED BY GRACE’: HOW LOUIS ZAMPERINI SURVIVED THE UNTHINKABLE BY THE GRACE OF GOD

The ceremony was held at Ciniero's home in Rancho Palos Verdes, California.

"You know what’s odd, in my whole life, he’s just my dad. And today I realized my dad’s a hero," Joel Ciniero, the veteran's son, told the National Guard's magazine. "It was like, wow! I got to tell you, I get a little bit emotional about it."

Joel said his father never spoke about the war "because I think combat was difficult for him," he said.

"Even when we are out and he’s wearing his WWII veteran hat, and people say thank you for your service," Joel said. "The issue for him is he’s grateful, but he really thinks the thanks goes to all his friends that didn’t come back from the war.

Ciniero's division was recognized by the U.S. Army’s Center of Military History and the U.S. Holocaust Memorial Museum in 1995 for helping to liberate a concentration camp called the Halberstadt-Zwieberge, according to the Guard.