Four teachers from a Los Angeles-area school sued Delta Air Lines on Friday, saying they were exposed to jet fuel when a plane with engine trouble dumped its fuel over a densely populated area, including several schools, while making an emergency return to the airport.

At a news conference, the teachers described the fuel as drizzling down like raindrops with “overwhelming” fumes. They said their panicked students screamed and cried.

“The plaintiffs could feel the fuel on their clothes, their flesh, their eyes and their skin,” said the teachers' attorney, Gloria Allred, who noted that her firm may add teachers or students to the lawsuit. 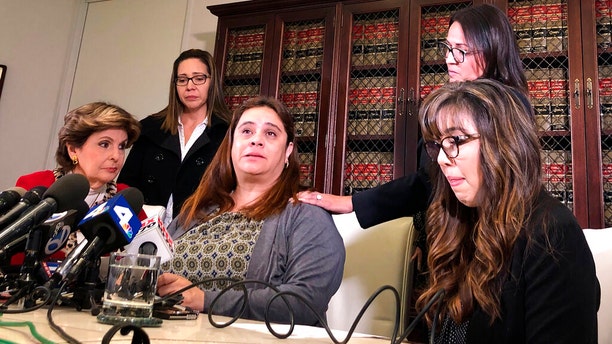 “Fuel penetrated their mouths and noses as well, producing a lasting and severe irritation, and a lasting and a noxious taste and smell,” Allred said.

FAA: DELTA DID NOT INFORM US ABOUT FUEL DUMP AHEAD OF TIME

Officials have said nearly 60 schoolchildren and teachers were exposed to the smelly vapor Tuesday and were examined for minor skin and lung irritations and told to wash with soap and water. No one was taken to a hospital.

The teachers said they sought medical treatment after the incident and suffered physical and emotional pain.

The plaintiffs, Lisette Barajas, Laura Guzman, Mariana De La Torre and Anabel Samperio, appeared at the news conference with their attorney but declined to be identified individually when they spoke.

Also on Friday, the South Coast Air Quality Management District — the governmental agency that monitors air pollution for parts of Southern California —issued a violation to Delta for the fuel dump.

The agency alleges that the fuel created a public nuisance. Violations can result in civil penalties or lawsuits. 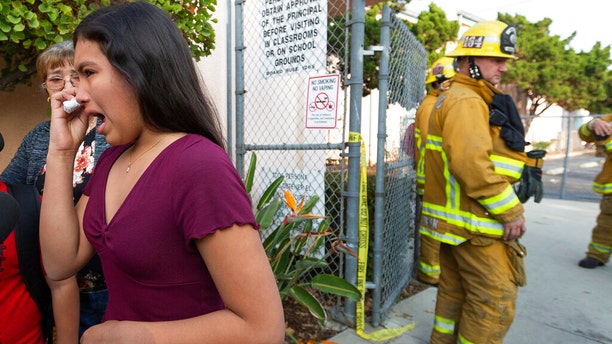 A student with irritated eyes and skin is seen during the evacuation of the Park Avenue Elementary school in Cudahy, Calif., on Tuesday, Jan. 14. (AP Photo/Damian Dovarganes)

The airline previously said Flight 89 to Shanghai had an engine problem after takeoff and needed to quickly return to Los Angeles International Airport. The Boeing 777-200 landed safely after circling back over Los Angeles while dumping 15,000 gallons of fuel to reach a safe landing weight.

The weight of a full load of fuel carries a risk of damaging a jetliner during landing — which can be expensive for an airline to fix. Even if there isn't damage, airlines try to avoid overweight landings because they are required to inspect planes, which puts them out of service.

Not much is known about the health effects of exposure to kerosene-type jet fuel, according to the federal Health and Human Services Department. Studies using military personnel suggest it can affect the nervous system, but that research involved people who work around jet fuel all the time. Rats that were fed kerosene showed no increase in tumors, the agency said in a 2017 summary.

The flight crew radioed that the jet needed to return due to a compressor stall, a potentially serious problem. The pilot or co-pilot initially said a fuel dump was not needed but the aircraft later did begin releasing streams of fuel from its wings.

The airline said it immediately began investigating, but no detailed information about the situation facing the pilots has been released.

The Federal Aviation Administration is also investigating the fuel dump, citing procedures that “call for fuel to be dumped over designated unpopulated areas, typically at higher altitudes so the fuel atomizes and disperses before it reaches the ground.”