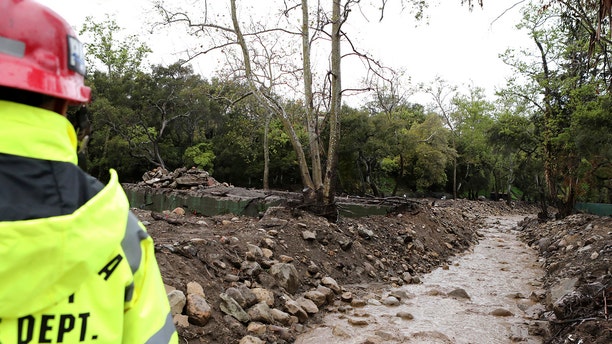 A powerful storm spread more rain across California on Thursday, swelling rivers, flooding streets and causing some mud and rock slides but, so far, sparing communities a repeat of the disastrous debris flows that hit during a downpour early this year.

The National Weather Service issued flood warnings along foothills on the western flank of the Sierra Nevada and there were numerous reports of street flooding in Central Valley cities including Fresno and the nearby city of Clovis.

On the south coast of Santa Barbara County, authorities kept a close watch on the community of Montecito, where a sudden downpour in January unleashed boulder-laden flash floods from a wildfire burn area, destroying or damaging hundreds of homes and killing 21 people.

With the storm just hours from fading away in that area, there had been no major problems.

No debris flows had occurred, creeks were flowing well and debris catch-basins were functioning, he said.

Over three days the rain had gone through cycles of intensifying and then decreasing, but there wasn't a huge amount of rain in a short period of time, he said.

Thousands of people fled Montecito and neighboring communities in advance of the current storm, just as they had during previous rains and last year during a wildfire that became the largest in state history as it destroyed more than 1,000 buildings, mostly homes.

Carolyn Potter, 59, evacuated from her home in Casitas Springs in Ventura County on Wednesday — the fourth time since September — and planned to sleep in her car in a grocery store parking lot to avoid hotel costs and the bustle of an evacuation shelter.

Meanwhile her husband Alan was staying home, just like he had the other three times Potter has evacuated because of fires or storms since September.

"I feel better not being under the cliff in my sleep," Potter said. "If he feels OK that's his problem. If something happens maybe I'll zip on down and dig him out."

In Los Angeles County, authorities canceled some planned mandatory evacuations because of a projected decrease in rainfall but kept others in place because of debris flows in one canyon area stripped bare by wildfires.

A large chunk of a hillside fell away in a Los Angeles canyon that burned last year, but no one was hurt.

The storm came ashore earlier in the week as a so-called atmospheric river, a long plume of Pacific moisture that is also known as a "Pineapple Express" because of its origins near Hawaii.

Forecasters said the plume was finally shifting to the east but there would be a chance of thunderstorms through Thursday evening as a cold front moved down from the central coast, so the "concern for significant flash flooding and debris flows has lessened but not gone away completely."