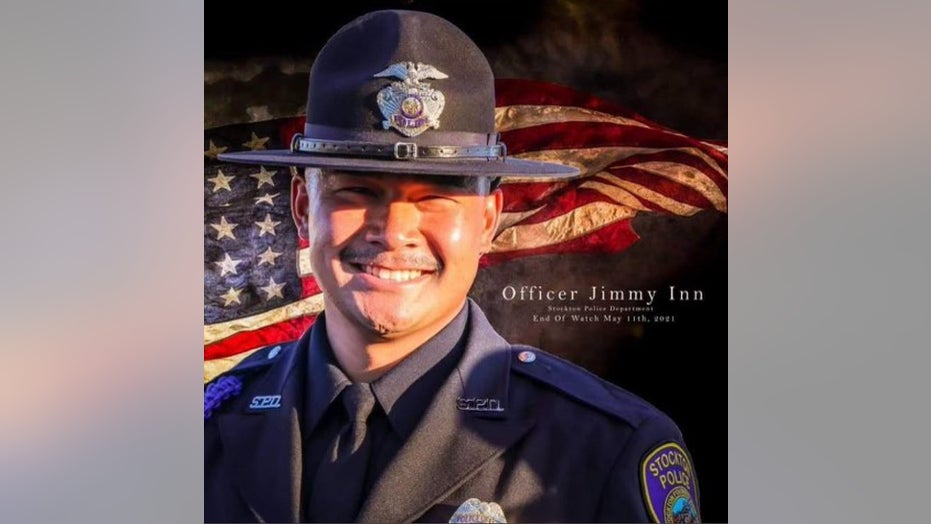 Authorities identified a Northern California police officer who was fatally shot Tuesday as a five-year veteran who leaves behind a 7month-old son.

Stockton Police officer Jimmy Inn, 30, was shot just after 10 a.m. upon arriving at the front of a home after a caller described a woman who was bleeding and possibly assaulted," police Chief Eric Jones said.

"It was a violent, blatant and very sudden assault on our police officer," Jones said of the shooting.

After the shooting, another officer arrived at the scene and exchanged gunfire with the unidentified suspect, Jones said. The suspect went back inside the home and returned moments later holding an 8-year-old boy.

"He began strangling the child and refused to obey the officer's commands," Jones said. "Indications are that the suspect was attempting to kill the child."

A bystander tackled the suspect and the officer opened fire, hitting the suspect. Jones said the actions of the good Samaritan may have saved the child's life.

Inn and the suspect were taken to a hospital where they both died. He leaves behind a wife, who is also a Stockton police officer, a 7-month-old son and two step-children, a girl, 12, and a 14-year-old boy, Jones said. He was assigned to the department's Field Operations Division and was a member of the Honor Guard, which honors fallen officers in other jurisdictions.

"He was a positive, optimistic person and so very well-liked," Jones said.

"At this moment our community grieves the loss of one of our very own Stockton police officers," he said in a video posted on Twitter. "This is a time for us to come together to surround and support one another and to pray for the strength, healing, comfort and peace of all that have been impacted by this great tragedy."